We know that this is an especially worrying time for people with cancer and their family and friends. We have separate information about coronavirus and cancer. Please read that information alongside this page. We will update that information as guidance changes.

This trial compared paclitaxel and carboplatin with irinotecan and cisplatin for clear cell cancer, a rare form of ovarian cancer. Cancer Research UK supported this trial.

Doctors usually treat ovarian cancer with surgery and then chemotherapy. They often use the chemotherapy drugs paclitaxel (Taxol) and carboplatin. But these drugs don’t always work very well for clear cell ovarian cancer.

Doctors hoped a combination of irinotecan and cisplatin would work better.

The trial team found that irinotecan and cisplatin didn’t work any better than paclitaxel and carboplatin for clear cell ovarian cancer.

This was an international phase 3 trial. It was a randomised trial. 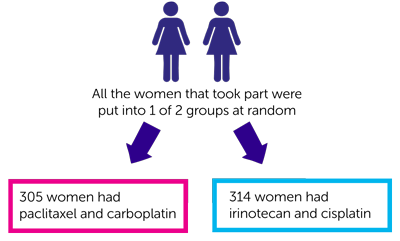 After 2 years the team looked at the total number of women in each group who were still alive. They found this was:

They also looked at how many women had no sign of cancer. They found this was:

The most severe side effects of paclitaxel and carboplatin were:

The most severe side effects of irinotecan and cisplatin were:

The trial team concluded that irinotecan and cisplatin isn’t any better than paclitaxel and carboplatin as a treatment for clear cell ovarian cancer.