This trial wanted to see if the blood thinning drug dalteparin (Fragmin) could reduce the number of blood clots people had during treatment for lung cancer. And to find out if it could help stop cancer cells spreading through the bloodstream to other parts of the body. Cancer Research UK supported this trial.

Surgery, chemotherapy or radiotherapy can all be used to treat lung cancer. You may have more than one of these treatments.

Blood clots are quite common in people who have lung cancer. And cancer treatment can increase the risk of blood clots. Dalteparin is a blood thinning drug (anti coagulant) that is widely used to prevent and treat blood clots. Doctors thought that dalteparin might also affect how cancer cells spread through the bloodstream, but they didn’t know this for sure.

The aims of this trial were

The trial team found that dalteparin didn’t help people with lung cancer to live longer. But it did reduce the number of blood clots.

. The other half had dalteparin with standard treatment. 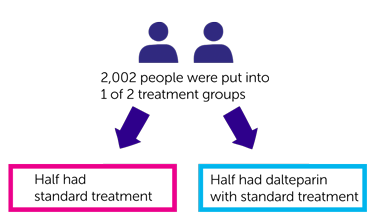 The trial team followed people up after their treatment. After just under 2 years they looked at the average length of time people lived. For both groups it was about 10 months.

They also looked at the average length of time it took for the cancer to spread. For both groups it was about 9 weeks.

The number of people who developed blood clots was:

The trial team concluded that although having dalteparin reduces the number of blood clots, having it also increased the risk of bleeding and so should not be given to everyone with lung cancer. There was also no increase in people living longer. They say that future research should concentrate on looking at giving blood thinning drugs to specific groups of people with lung cancer who have been identified as having a higher risk of developing a blood clot.