A trial of pazopanib after surgery for kidney cancer

This trial looked at a drug called pazopanib after surgery to remove kidney cancer. It was for people who had the most common type of kidney cancer called renal cell cancer.

Surgery is a treatment for kidney cancer that hasn’t spread to other parts of the body. Your surgeon removes a part, or the whole kidney, and the tissues around it. This can get rid of the cancer completely for some people.
But sometimes cancer cells can remain in your body after surgery, and the cancer can start to grow again. Researchers are trying to find ways to stop kidney cancer from coming back after surgery. In this trial, they looked at a drug called pazopanib.
Pazopanib (Votrient) is a targeted cancer drug called a cancer growth blocker. It stops signals that cancer cells use to divide and grow. Pazopanib is already used to treat kidney cancer that has spread to other parts of the body (advanced). But doctors wanted to know if it can also help to stop kidney cancer from coming back after surgery.
Everyone that took part in this trial had surgery and then 1 of the following:
The main aims of this trial were to:

The trial team concluded that pazopanib doesn’t stop renal cell cancer from coming back after surgery.
This was a phase 3 trial. 1538 people who had surgery to remove renal cell cancer took part.
The trial was a randomised trial. People were put into 1 of the following treatment groups by computer:
• 769 people had pazopanib
• 769 people had a dummy drug
Neither they nor their doctor could choose which group they were in. And neither they nor their doctor knew which group they were in. 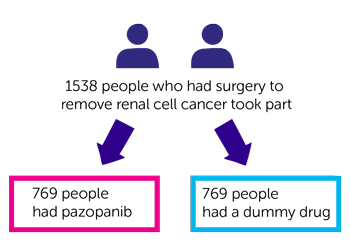 Everyone had pazopanib or a dummy drug once a day, for 1 year. Doctors reduced the dose of pazopanib during the trial. This was because of the side effects. So, 198 people had a high dose of pazopanib and 571 people had a low dose.
The research team looked at how well pazopanib worked. To do this they looked at the number of people who had no signs of their disease 3 years after the end of treatment. This is called disease free survival. They found it was:
The team also looked at the most common side effects people had. They were:
The trial team concluded that pazopanib doesn’t stop renal cell cancer from coming back after surgery. They also found that the side effects of pazopanib in this study were similar to the side effects from previous trials.
We have based this summary on information from the research team. The information they sent us has been reviewed by independent specialists (