Doctors often treat prostate cancer with hormone therapy. This can keep the cancer under control for a long time. But at some point, it may start growing again. If this happens, you can have a chemotherapy drug called docetaxel. If the cancer continues to grow or comes back after docetaxel, you may have a drug called abiraterone. But researchers are looking for ways to improve treatment and in this trial they are looking at a drug called GDC-0068.

GDC-0068 blocks the action of a protein called AKT. This may stop cancer cells growing. The aims of the trial are to

You may be able to join this trial if all of the following apply. You 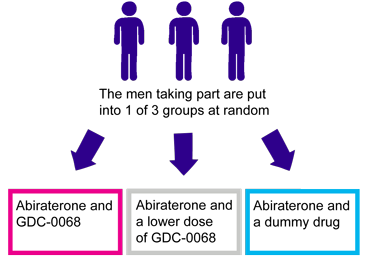 You take both abiraterone and GDC-0068 (or the dummy drug) as tablets every day. You also take a steroid drug called prednisolone each day. This is to reduce some of the side effects of abiraterone.

The trial team will tell you how and when to take the tablets. They will give you a diary to keep at home. In this, you write down the time you take the tablets each day.

The trial team will ask you to fill out a questionnaire before you start treatment, every 4 weeks during treatment and after you finish treatment. The questionnaire will ask about side effects and how you’ve been feeling.  This is called a quality of life study.

For the first 3 months of the trial, they will also ask you to fill in a diary every day to record whether you have any pain.

As long as you don’t have bad side effects and your cancer doesn’t get worse, you can carry on having treatment in this trial for up to 2 years.

If you have to stop one of the drugs because of bad side effects, you may be able to carry on taking the other one on its own. Your doctor will discuss this with you.

You will see the trial team and have some tests before you start treatment. The tests include

in the past. If there is not a sample available, you will need to have a new biopsy.

You see the trial team 3 times in the first 4 weeks of treatment, twice in the 2nd 4 weeks, and then once every 4 weeks after that. You have regular blood tests and more ECGs.

You have a bone scan and a CT or MRI scan 4 times in the first 9 months of treatment and then every 3 months after that.

When you finish treatment, you see the trial team again a month later. They will then phone you every 3 months to see how you are.

If you stop treatment for any reason other than your cancer getting worse, your doctor will ask you to carry on having scans every 3 months until your cancer does start to get worse, or you start another treatment.

As GDC-0068 is a new drug, and this is the first time it is being used alongside abiraterone, there may be side effects we don’t know about yet. In trials looking at GDC-0068 alone, the most common side effects have been

Read more information about the side effects of abiraterone.