A trial of AZD5363 with paclitaxel for advanced breast cancer (BEECH)

This trial is looking at a drug called AZD5363 alongside paclitaxel for breast cancer that has spread into surrounding tissue or to another part of the body.

Doctors often use a chemotherapy drug called paclitaxel (Taxol) to treat breast cancer that has spread. But researchers are looking for ways to improve treatment. In this trial, they are looking at a drug called AZD5363.

AZD5363 is a type of biological therapy. It stops signals that cancer cells use to divide and grow and may make the cancer cells more sensitive to paclitaxel, making the drug work better.

You may be able to join this trial if all of the following apply. You

As well as the above, to join the 2nd part of the trial the following must also apply

As well as the above, you can’t join the 1st part of the trial if you have had either of the following

You can’t join the 2nd part of the trial if you’ve had any chemotherapy for breast cancer that has spread to another part of your body. You may have had chemotherapy before or after surgery to remove early stage breast cancer to help to stop it coming back, but if this included a

, you must have finished the treatment at least a year ago.

You have paclitaxel through a drip into a vein once a week for 3 weeks out of 4. It takes about an hour each time. AZD5363 comes in capsules or tablets that you swallow twice a day.

Half the women taking part have AZD5363 and paclitaxel. The other half have a dummy drug ( 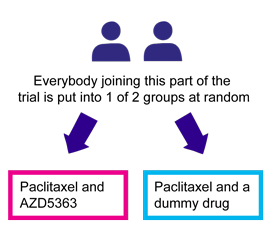 The trial team will tell you whether to take the tablets on 2 days a week or on 4 days a week.

If you join the 2nd part of the trial, the researchers will ask you to fill out a questionnaire before you start treatment, every 3 months during treatment and after you finish treatment. The questionnaire will ask about side effects and how you’ve been feeling.  This is called a quality of life study.

Whichever part of the trial you join, as long as you don’t have bad side effects, you can carry on having AZD5363 (or the dummy drug)  for as long as it helps you. The length of time you can have paclitaxel is usually limited to 6 months.

You will see the trial team and have some tests before you start treatment. The tests include

You go to hospital 4 times in the first week of treatment, twice in each of the next 7 weeks and then on 2 days in every 4th week after that.

If you join the first part of the trial and you agree, the trial team will take 4 of your eyebrow hairs on 3 separate occasions. This is to look for substances called biomarkers that doctors can measure to help them see how well the treatment is working.

The trial team will also ask you to have 2 more

during the trial. You don’t have to agree to this if you don’t want to. You can still take part in the trial.

When you finish having treatment, you see the trial team again 4 weeks later.

As AZD5363 is a new drug, there may be side effects we don’t know about yet. In trials so far, the most common side effects have included

AZD5363 can also cause changes

The trial team will monitor you closely for any side effects during the trial.

The most common side effects of paclitaxel include