This trial is looking at axitinib to treat bowel cancer that has spread to another part of the body (advanced bowel cancer).

Doctors can treat advanced bowel cancer with chemotherapy. But sometimes this doesn’t work and the cancer continues to grow. So they are always looking for new treatments.

Axitinib is a type of biological therapy. It works by targeting a protein called vascular endothelial growth factor (VEGF). The researchers think that axitinib may help people with advanced bowel cancer that has continued to grow despite having chemotherapy.

As a part of this trial, the researchers also want to look at measuring the blood flow to and from the liver using a new type of

This is a phase 2 trial that will recruit 50 people. It is a randomised trial. The people taking part are put into treatment groups by a computer. Neither you nor your doctor will be able to decide which group you are in. And neither of you will know which group you are in either. This is called a double blind trial. 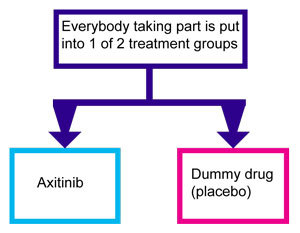 Axitinib and the dummy drug are tablets. You take them twice a day. You can continue treatment as long as it is helping you and the side effects aren’t too bad.

As a part of this trial the researchers also want to try a new type of liver scan called a contrast enhanced ultrasound.

The contrast enhanced ultrasound is similar to having an

, but uses a contrast called SonoVue, which is injected into a vein in your arm. The researchers then take an ultrasound scan of your tummy (abdomen) to measure the blood flow to and from your liver.

You have the contrast enhanced ultrasound before you start treatment and then in the 2nd and 8th week of treatment. It takes about 15 minutes each time. You cannot eat or drink for 4 hours before the scan.

If you agree to take part in this trial, the researchers will ask for a sample of tissue taken when you had surgery to remove your cancer. They will also ask for blood samples before starting treatment and then at weeks 2, 4 and 8. If you don’t want to give the tissue sample or the blood samples for this study, you don’t have to. You can still take part in the trial.

You see the doctor to have some tests before taking part in this trial. These tests include

During treatment you see the doctor to have the same tests at 2, 4 and 8 weeks, then monthly. You have a CT scan every 8 weeks.

At the end of treatment you see the doctor and have the same tests again.

The most common side effects of axitinib are

Your doctor will talk to you about the possible side effects before you agree to take part in the trial.