Doctors usually treat mantle cell lymphoma with chemotherapy. But sometimes this type of lymphoma does not respond very well to chemotherapy or it comes back after treatment (relapsed). Doctors wanted to find out if bortezomib could improve treatment for this type of cancer.

Bortezomib is a type of biological therapy called a proteasome inhibitor. Proteasomes are substances found in all cells that help break down proteins. Bortezomib interferes with the way they work, leading to a build up of proteins in the cells. This causes cells to die. Research has shown that cancer cells are more sensitive to bortezomib than normal cells.

The aims of this trial were:

The trial team found that adding bortezomib to chemotherapy improved the treatment for people with mantle cell lymphoma.

The original aim of the trial was for 66 people to take part. The trial team found that people who had bortezomib and chemotherapy were doing better than those who had chemotherapy alone. So the trial closed early.

This phase 3 trial recruited 46 people. This means the people taking part were put into 1 of 2 treatment groups by a computer. Neither they nor their doctor chose which group they were in. 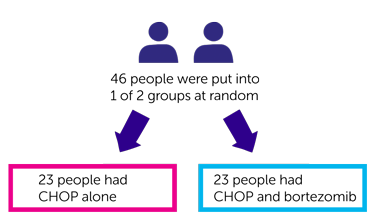 The trial team were able to measure the cancer in 41 of the patients. They looked at how many people had no signs of lymphoma. This is called a

The researchers also looked at whose lymphoma got a bit better. This is called a

The researchers looked at the time it took for the cancer to start growing again. On average it was

The researchers concluded that these results were not significant because they could have happened by chance. One reason for this was because more people who had CHOP on its own withdrew early from the trial.

The trial team looked at how long people lived for. They found that on average:

The researchers decided these results were significant and that no more people should be recruited to the CHOP alone treatment group. So the trial closed early.

The most common side effects reported in both groups were:

More people who had CHOP and bortezomib developed

Infections in both groups were not serious and treated successfully. Numbness and tingling were also mild and often only lasted for a short period of time.

The researchers concluded that generally people who had chemotherapy and bortezomib coped well with the increase in side effects.

The researchers recognise that adding another drug to chemotherapy, called rituximab, has also shown promise in trials. Rituximab is a type of biological therapy called a

. Another trial is looking at the use of bortezomib and rituximab with chemotherapy and the results may shape treatment in the future.