This trial was done to find the best way of stopping breast cancer from coming back in premenopausal women. The trial was supported by Cancer Research UK.

Some breast cancers are

(or ER positive). This means they grow in response to the hormone oestrogen. In women who haven’t been through the

, oestrogen is made in the

. After the menopause, the ovaries no longer make oestrogen, but a small amount is produced in fat tissues and by the

Doctors usually treat premenopausal women who have ER positive breast cancer with the hormone therapy drug tamoxifen, alongside other treatments such as surgery, radiotherapy or chemotherapy. Tamoxifen blocks receptors on breast cancer cells and helps to stop the cancer coming back after surgery.

Another group of drugs used to treat ER positive breast cancers are aromatase inhibitors. These drugs work by reducing the amount of oestrogen the body makes. They don’t block oestrogen made by the ovaries. But they block the small amounts made in fat tissues and the adrenal glands in women who have been through the menopause.

In this trial, the researchers wanted to see how well the aromatase inhibitor, exemestane worked for women who had not been through the menopause.

As their ovaries were still working, the women also had treatment to either remove or ‘switch off’ their ovaries and stop them making oestrogen. Switching off the ovaries is called ovarian function suppression or OFS.

Doctors sometimes recommend OFS to premenopausal women who are taking tamoxifen. But they are not sure how much extra benefit women get from this, particularly if they also have chemotherapy after surgery.

The aim of the trial was to find out which treatment was better at stopping breast cancer from coming back in premenopausal women.

The researchers found that more women who had exemestane and OFS were free of breast cancer after 5 years than women who had tamoxifen and OFS.

The trial recruited 3,066 women. They had all had treatment for early breast cancer.

It was a randomised trial. The women taking part were put into 1 of 3 groups by computer. Neither they nor their doctor could decide which group they were in. 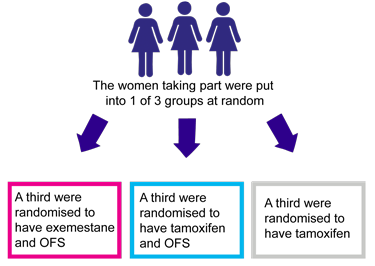 A small number of women never started treatment, or the trial team don’t have results for them. But the researchers analysed the results for women in both the groups that had OFS alongside results of another trial that looked at exemestane, tamoxifen and OFS in premenopausal women. The other trial was called the TEXT trial.

By looking at both trials together, they were able to compare the results from more than 4,600 women.

They looked at the number of women in both trials who were living without any signs of breast cancer after 5 years. Doctors call this disease free survival. They found it was

The researchers need to follow up the women for longer to see if there is a difference in how long they live overall. Doctors call this overall survival.

Nearly all the women had hot flushes during treatment. Many had problems with their muscles, bones or joints, but this side effect was more common in the group having exemestane. Less than a third of the women in each group had serious side effects. This is about the same as when

women have these drugs.

The SOFT trial team also looked at results for women who had tamoxifen alone. They found that just under 85% of them were living without any signs of breast cancer after 5 years.

The combined results of the TEXT and SOFT trials show that more premenopausal women who had treatment with exemestane and OFS were free of breast cancer after 5 years than women who had tamoxifen and OFS.