This trial looked at a drug called ipilimumab for prostate cancer that was no longer responding to hormone therapy.

It was for men who only had mild symptoms, or no symptoms at all. And who hadn’t had chemotherapy.

If prostate cancer stops responding to hormone therapy, you might have chemotherapy. But if you don’t have any bad symptoms, your doctor might suggest you don’t start any other treatment. Instead, they can keep a close eye on you, and you have regular tests to monitor your cancer.

Researchers thought ipilimumab might help men in this situation, but they wanted to find out more about how well it worked, and how safe it was.

The trial team found that treatment with ipilimumab didn’t help men with prostate cancer to live longer. But it did affect the length of time it took before some men’s cancer got worse. And the researchers found that the level of prostate specific antigen (

) dropped in some men who had ipilimumab.

This was an international phase 3 trial. 602 people took part.

It was a randomised trial. Everyone was put into 1 of the following treatment groups by computer:

Almost twice as many men were put into the ipilimumab group than the dummy drug group.

The research team looked at the number of men that took part in each group: 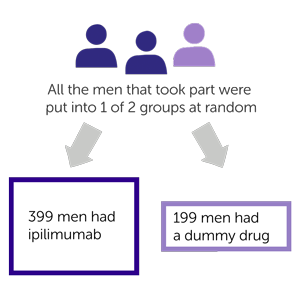 4 men didn’t start their treatment after they were put into a group.

The study team looked at how well the treatment worked. To do this they looked at the average length of time people lived without any signs of their cancer getting worse. This is called progression free survival. They found it was:

The researchers used men’s PSA level as a way of measuring if ipilimumab was working. If the PSA level went down by more than half from the starting level, the researchers thought the cancer was responding to ipilimumab.

The trial team found that the PSA level had gone down by more than half in around:

They also looked at the amount of time people lived. This is called overall survival. They found it was:

Diarrhoea was the only severe side effect that more than 1 in 10 men (10%) in the ipilimumab group had.

The trial team concluded that ipilimumab does not help men with prostate cancer that has stopped responding to hormone treatment to live longer. But it did affect the length of time it took before some men’s cancer got worse. And it helped lower some men’s PSA level.

The researchers are not sure why ipilimumab:

The team think more research should be done to see if it would be possible to predict who would benefit from ipilimumab before treatment starts. They also want to look at different targeted cancer drugs for men with prostate cancer that’s stopped responding to hormone treatment.