This trial is looking at a drug called dalotuzumab alongside irinotecan for cancer of the back passage (rectum) that has spread to other parts of the body.

If rectal cancer spreads to another part of the body, you may have a chemotherapy drug called irinotecan and a drug called cetuximab. Cetuximab is a type of biological therapy called a monoclonal antibody. These can seek out cancer cells by looking for particular proteins.

In this trial, researchers are looking at another monoclonal antibody called dalotuzumab.  Everybody taking part has irinotecan. Some people have cetuximab with it, some have dalotuzumab.

Some bowel cancers have a change (a

) to a gene called K-RAS. We know from research that cetuximab doesn't help people who have this mutation, so the researchers need to test for this.

Before you can take part in this trial, they will ask your permission to get a sample of your cancer that was removed when you had surgery or a

You have treatment in 6 week cycles. 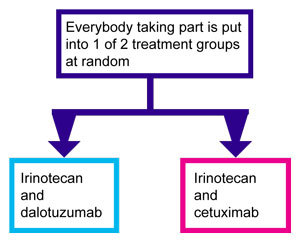 You have these drugs through a drip into a vein. As long as you don’t have any bad side effects, you can carry on having the treatment for as long as it helps you.

During the trial treatment, you go to hospital once a week. You have regular blood tests and you have a CT scan every 6 weeks.

People having dalotuzumab have another hearing test during the first cycle of treatment to check for any signs of hearing loss.

They will ask if a nurse can phone you every 3 months to see how you are. This follow up is optional – you don’t have to agree to this if you don’t want to.

When people had dalotuzumab at the same time as chemotherapy, the side effects included

We have more information about the side effects of irinotecan and cetuximab.