This trial compared surgery to remove the bladder (radical cystectomy) with radiotherapy after chemotherapy to shrink the cancer. The trial aimed to find out which was the best treatment for bladder cancer in the long term.

As an alternative to surgery, some doctors use radiotherapy and sometimes chemotherapy as well.

Radiotherapy allows you to keep your bladder. But it has side effects and if the cancer comes back, you might still have to have surgery to remove your bladder.

In this trial the researchers looked at how well the cancer responded to chemotherapy. They thought this would help doctors select people who might also benefit from radiotherapy.

Everyone in this trial had chemotherapy first to try and shrink their cancer. They were then

People in group 1 had surgery to remove the bladder.

This was a pilot trial, it is a small scale version of a larger trial.

The team found that it wasn’t possible to do a large phase 3 trial comparing surgery with selective bladder preservation.

In this pilot trial the team needed 110 people to join in a 3 year period.

165 people were asked to join the trial. Of these 120 people declined. The reasons given were:

After being open for 2 ½ years, 45 people had joined the trial.

It was a randomised trial. Everyone was put into 1 of 2 groups. 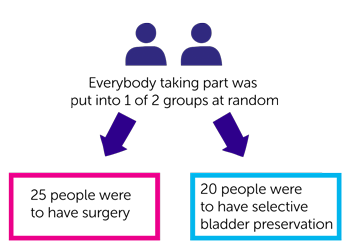 Of the 25 people who were to have surgery, 6 people had radiotherapy.

Of the 20 people who were to have selective bladder preservation:

After an average follow up of just under 5 years the team said they weren’t able to either confirm or reject whether treatment using selective bladder preservation worked as well as surgery.

16 people who had surgery had severe side effects. The most common side effect of surgery was tiredness (fatigue).

The trial team concluded that a phase 3 trial comparing surgery to selective bladder preservation wasn’t possible. When comparing the 2 treatments they couldn’t obtain any firm conclusion because of the small numbers of people who took part.