This trial looked at 2 different combinations of chemotherapy alongside radiotherapy for cancer of the food pipe (oesophagus). It was for people whose cancer:

Chemotherapy or a combination of chemotherapy and radiotherapy (chemoradiation) followed by surgery are the usual treatments for oesophageal cancer.

When this trial was done, recent research suggested that chemoradiotherapy before surgery might be better at shrinking the tumour and preventing cancer spread than chemotherapy. The research also suggested some newer chemotherapy drugs might improve treatment. These included:

The trial team found both chemotherapy combinations were safe to give with radiotherapy and the side effects were similar. But they say carboplatin and paclitaxel worked a bit better.

85 people took part in this trial. To begin with, everyone had 2 cycles of oxaliplatin and capecitabine chemotherapy. Then they were put into 1 of the following 2 treatments groups at random. 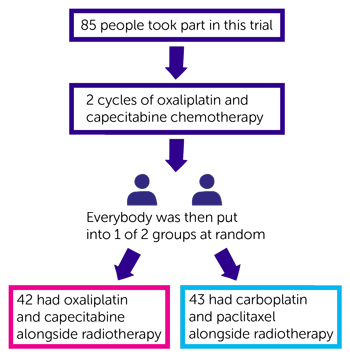 Everyone had some tests to see how much the tumour had shrunk. Those suitable for surgery had their operation 6 to 8 weeks after chemoradiotherapy finished.

The researchers looked at the number of people who had surgery. This was

The researchers looked at the tumour removed during surgery. They found the cancer had gone away completely in:

The trial team are also looking at how long people lived for after treatment. This is called overall survival. They are following up people who took part in the trial. They hope to have this information available in autumn 2018.

The serious side effects were similar between the 2 groups. Although people who had carboplatin and paclitaxel had more problems with a drop in the number of white blood cells (

The trial team concluded that carboplatin and paclitaxel alongside radiotherapy worked well enough to be looked at in a future trial. The trial team also say it is safe to have radiotherapy before surgery for oesophageal cancer that has spread into surrounding tissues.

We have a summary of an open trial comparing carboplatin and paclitaxel with another combination of chemotherapy, alongside radiotherapy on our clinical trials database. It is called SCOPE 2.