This study tested a questionnaire called SPARC with people who had supportive care or palliative care needs in Sheffield. It was for people who needed help to deal with symptoms from cancer or other long lasting diseases (chronic diseases).

We know from research that people with cancer or other chronic diseases often live with:

In this study researchers wanted to see if using a questionnaire called SPARC alongside the usual support services, improved people’s care and

SPARC stands for Sheffield Profile for Assessment and Referral for Care. This questionnaire covers a wide range of issues that people may have (it’s a holistic needs assessment).

The study team asked people with or without cancer who used a supportive or palliative care service in Sheffield to complete the SPARC questionnaire. People also answered questions about their experiences.

The main aims of this study were to:

The study team concluded that the SPARC questionnaire did not help people who had supportive care or palliative care needs. They think the questionnaire gave people expectations that couldn’t be met.

225 people took part. Everyone had supportive or palliative care needs and had been referred to the Sheffield Palliative Care Service.

This study was randomised. People were put into 1 of 2 groups either an intervention or a control group:

43 people that agreed to take part did not complete any questionnaires. 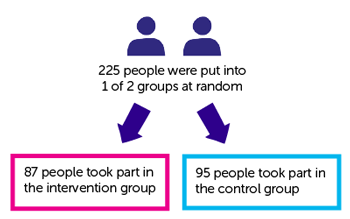 Everyone completed 3 sets of questionnaires at the start of the study and then after:

The questionnaires asked people about:

Intervention group
As well as the 3 sets of questionnaires, everyone completed the SPARC questionnaire before the start of the study.

People then had usual care, which is help from the palliative care team to deal with their symptoms or problems.

Control group
Everyone completed the 3 sets of questionnaires and had usual care.

People also completed the SPARC questionnaire 2 weeks after the start of the study.

Both groups
The research team looked at the completed questionnaires and at the problems and concerns people had. They found that people were mainly concerned with physical symptoms such as pain, their condition and disability.

People were also concerned about:

The study team looked at people’s level of concern (the concern score) before the start of the study and after 6 weeks. They found it had improved in both groups. But people in the intervention group had less improvement than people in the control group.

So the study team concluded that the SPARC questionnaire did not help to improve people’s quality of life or level of concern.

The study team think that unless the questionnaire is completed along with a clinical assessment (done by a doctor or nurse) it might lead to raised expectations that can’t be met by the specialist services.

They suggest that if SPARC was included in the assessment that is used to create a care plan, then it might have some benefit. This benefit would only be within a specialist supportive or palliative care service.

We have based this summary on information from the research team. The information they sent us has been reviewed by independent specialists

and published in a medical journal. The figures we quote above were provided by the trial team who did the research. We have not analysed the data ourselves.