A study looking at support for couples affected by prostate cancer

Surgery is often used to treat prostate cancer. Like all treatments surgery has side effects. These can include:

Prostate cancer and treatment side effects might also affect your partner.

We know from research that couples feel they don’t have enough support to cope with these effects. And they would be keen to have support if it was offered.

Researchers in this study tested a new way of supporting couples.

They asked couples to join a pilot study to see how well the support worked. And to see if it would be possible to offer this support to more people.

Half the couples had 6 support sessions with a practitioner who specialised in couple support. And the other half had standard care from their regular prostate cancer team.

The researchers thought that couples who had specialist support would have a better quality of life and a stronger relationship.

As well as testing this support in a small group of people the team worked out the overall cost of providing this support. This included any benefit it had on reducing the need for other healthcare services.

The study team found that this type of support was possible and acceptable to the men and their partners.

43 couples took part in this pilot study. It was a randomised study. The couples were put into 1 of 2 groups by a computer. Neither they or their doctor could choose which group they were in.

The 2 groups were couples who: 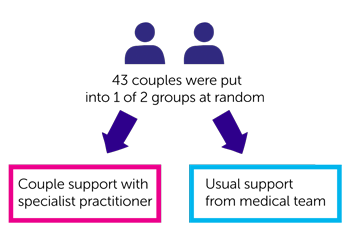 The questions asked about:

The team found that the specialist couple support did significantly help the couples with their sexual relationships immediately after starting the support. But this wasn’t maintained over a long period of time.

Feasibility and acceptability
The team interviewed the couples to find what they thought about the specialist support.

They said the support was possible and acceptable.

Although some couples said they had difficulties working their way through attitudes and feelings about sexuality. Most were pleased to be able to access the increased support after surgery.

Cost of support
The team estimated the cost of doing the specialist support was about £468 for each couple.

Overall findings
The study team said that these results suggest that the specialist support was possible and acceptable for couples affected by prostate cancer. Before they can recommend it to be part of care a large clinical trial needs to be done to find: