This study compared an online tool with an information leaflet to see which helped people cope with their tiredness better.

Many people have extreme tiredness (fatigue) after treatment for cancer. This can affect their quality of life. So researchers want to find ways to help support people with fatigue. They developed an online tool called RESTORE.

The aim of this study was to compare RESTORE with the Macmillan Cancer Support leaflet called ‘Coping with fatigue’. To find out which might best help to support people after treatment for cancer.

The team found the online information RESTORE helped people to manage their fatigue.

. The people who took part were put into 1 of 2 groups.

At the start of the study, everyone completed a questionnaire. 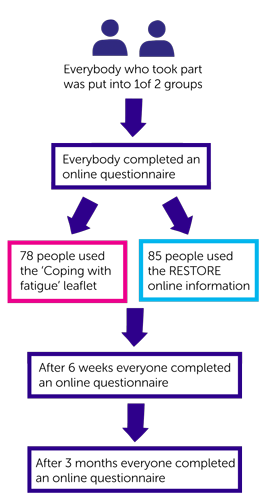 After 6 weeks, they completed the same questionnaire. This showed those who used RESTORE reported feeling better able to cope with their fatigue than those who used the leaflet.

After 3 months when they completed the questionnaire again, there was no difference in both groups ability to cope with fatigue.

The study team concluded that RESTORE helped people manage their fatigue. As many people took part in the study this suggested there was an interest in information about supportive measures after treatment.