A study looking at obesity in people with Barrett's oesophagus

This study looked at any link between being very overweight and developing a pre cancerous condition of the food pipe called Barrett’s oesophagus.

Obesity is when a measurement called your

If researchers find a link between obesity and Barrett’s, they may be able to develop ways of reducing cancer risk in this group of people.

The study team found that although some people with Barrett’s oesophagus were normal weight, more people who were overweight had the condition. And this was highest in the people whose fat was mainly around their waist (abdominal obesity).

The study team asked people who were due to have an endoscopy to take part in the study.

When people agreed to take part the team:

Depending on the results of the endoscopy people were put into 1 of 2 groups. 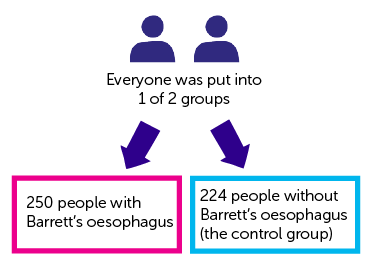 The study team then looked at a number of different factors including:

The team concluded that abdominal obesity is a high risk factor for developing Barrett’s oesophagus. This adds to the importance of health promotion programmes which help people to lose weight and manage their diet.

They would like to see more work done on the link between insulin levels and metabolic syndrome and Barrett’s oesophagus. This would help us understand more about how these conditions are linked.