This study was for men who were due to have radiotherapy to their prostate gland.

The researchers looked at a device called a rectal balloon. They were trying to find out whether it could stop the prostate gland moving and the rectum changing size or shape during radiotherapy.

During treatment, men might also have cone beam scans to make sure the radiotherapy is being accurately aimed at the cancer. A cone beam scan is similar to a CT scan but uses lower energy x-rays.

The size and shape of the back passage ( 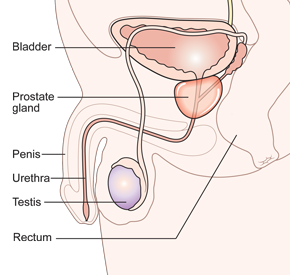 Radiotherapy to the rectum can cause side effects such as diarrhoea and pain in the rectum.

This was a feasibility study. The study team thought it might be possible to control the size of the rectum during treatment using a device known as a rectal balloon. This would reduce the amount of radiation to the rectum. In turn, this would hopefully reduce some of the side effects men can have after radiotherapy for prostate cancer.

In this study, the researchers wanted to:

The study team found that the rectal balloon might help to keep the shape of the rectum the same during radiotherapy to the prostate gland. But the balloon did not help the rectum to be in a better position for treatment.

Ten men took part in the study. They all had external beam radiotherapy to treat their prostate cancer.

All the men had a CT scan as part of their appointment to plan their radiotherapy treatment. This is routine practice.

The men did not have a rectal balloon in place during their radiotherapy treatment. But researchers were able to look at the different scans and compare the appearance of the prostate gland and rectum, with and without the balloon in place.

They found that a rectal balloon:

The study team recognised that a limit of the study was that it involved a small number of men.

Further research involving larger numbers of men is needed to look at whether this can reduce the amount of radiation to the rectum and so reduce side effects.

The men taking part were asked various questions about their experience of having the rectal balloon. For example, they were asked whether they would agree or disagree with the sentence ‘I found the placement of the balloon comfortable today’.

While some men did not find the placement of the balloon comfortable, men generally were able to tolerate having the balloon in place.

) but may not have been published in a medical journal. The figures we quote above were provided by the research team. We have not analysed the data ourselves.