This study is comparing 2 types of treatment for blood clots in people who have cancer. It is also looking into the best length of time to have the treatment for.

Blood clots (thrombosis) are more common in people who are having (or have had) treatment for cancer. Doctors think that cancer cells can release chemicals which make the blood thicker than usual, and so more likely to form a clot.

A blood clot in an arm or leg is called a deep vein thrombosis or DVT. It can cause redness, pain and swelling. If bits of the clot break off and are carried to the lungs, they can cause a blockage called a pulmonary embolism or PE. You may have a sudden cough, chest pain or breathlessness. The clots need treatment as some may be life threatening.

If you have a blood clot, you may have a blood thinning injection called dalteparin, or Fragmin. This helps to dissolve the clot and stop others forming.

In this study, researchers want to compare this with a blood thinning tablet called rivaroxaban.

The aims of this study are to see

You may not get any direct benefit from taking part in this study. But the results will be used to help people with cancer in the future.

You cannot enter this study if you

The first part of the study is randomised. Everybody taking part will be put into 1 of 2 groups by a computer. Neither you nor your doctor will be able to decide which group you are in.

If you are in group 2, you take rivaroxaban tablets every day for 6 months.

Towards the end of treatment, everyone with a DVT will have a type of ultrasound scan to see if it has gone. If it has, you complete your 6 months of treatment.

If you still have a DVT, or if you joined the study because you had a blood clot in your lungs, you go on to part 2 of the pilot study.

Part 2 is also randomised. The people taking part will be put into 1 of 2 new groups by a computer. Neither you nor your doctor will be able to decide or know which group you are in. This is called a double blind trial.

If you are in group 1, you take

If you are in group 2, you take rivaroxaban tablets for 6 months. 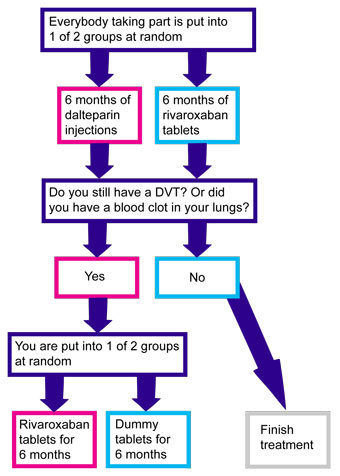 The study team will ask you to fill out a questionnaire before you start treatment, every 3 months for the first year and then at 18 months and 2 years. The questionnaire will ask about side effects and how you’ve been feeling. This is called a quality of life study. You will also fill out questionnaires asking about whether the clot and its treatment has affected your finances.

The team will also collect information from your medical notes to see how you are getting on.

The team will ask if you would be willing to give up to 4 blood samples for the study. And, to give them permission to store any pieces of tissue or cancer that you may have had removed during any cancer surgery. You do not have to agree to this if you don’t want to. You can still take part in the main pilot study.

You see the study team 3 times in the first month, and then at

You have blood tests at some of these appointments.

If you have a blood clot in your leg, you also have a scan after 5 months of treatment to see if your blood clot has gone. You go to hospital for the scan.

The side effects of dalteparin and rivaroxaban are similar. The most serious one to look out for is bruising or bleeding. The team will tell you what you need to look out for, and who to contact if you have problems.

If you have any bleeding that will not stop or is not normal for you – such as a severe nose bleed or blood when you cough or go to the toilet – you must tell your nurse or doctor straight away.