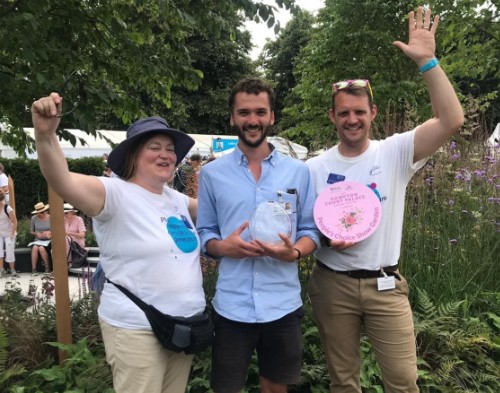 The garden will be at the RHS Hampton Court Palace Garden Festival taking place on 6-12 July 2020.

It tells the story of how our supporters and researchers pledge to beat cancer for future generations.

Find out more about the garden

How do you feel about working with Cancer Research UK?

I am thrilled to be working with Cancer Research UK again and hope to build on the success of last year’s RHS show garden. This year’s garden builds on the narrative of gifts in Wills being something everlasting. To leave a legacy gift is to leave something for the benefit of future generations. The garden will be a celebration of these gifts. It pays tribute to those who have left a gift and highlight their importance in funding research.

As a result of working with Cancer Research UK do you feel more connected to the cause?

Yes. During show week in 2019, I felt humbled by some of the stories people would tell me after visiting the garden. Some tragic, and others of survival and hope. I hadn't expected people to engage with the garden as much as they did. In some instances, people left a gift in their Will as a result of visiting the garden. This was the greatest achievement of the garden.

Before your show garden career, you were in Hollywood and even featured in films, can you tell us more?

I worked behind the camera as a crew member on a variety of television programmes and feature films. Everything from daytime BBC dramas to Oscar-winning blockbusters. I have appeared in a couple of films, but only as an extra or one time as a double for the main actor. In the Theory of Everything, starring Eddie Redmayne, I appear in one scene as the back of his head. Contrary to belief, for me working in film was never very glamorous.