49% of melanoma skin cancer cases in the UK are in females, and 51% are in males.

Melanoma skin cancer incidence is related to age, with the highest incidence rates being in older people. In the UK in 2015-2017, on average each year more than a quarter of new cases (28%) were in people aged 75 and over.[1-4] 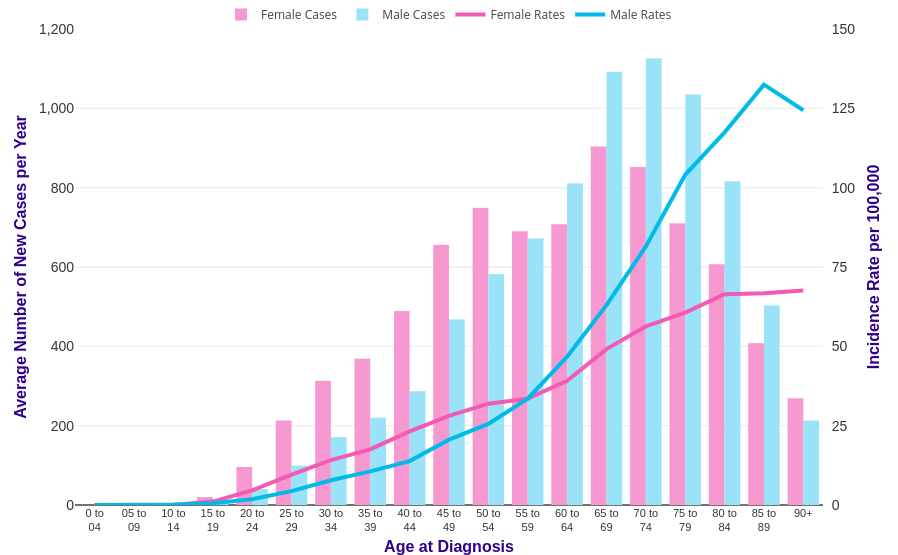 For melanoma skin cancer, like most cancer types, incidence increases with age. This largely reflects cell DNA damage accumulating over time. Damage can result from biological processes or from exposure to risk factors. A drop or plateau in incidence in the oldest age groups often indicates reduced diagnostic activity perhaps due to general ill health.

Melanoma skin cancer European age-standardised (AS) incidence rates for females and males combined increased by 135% in the UK between 1993-1995 and 2015-2017.[1-4] The increase was larger in males than in females. 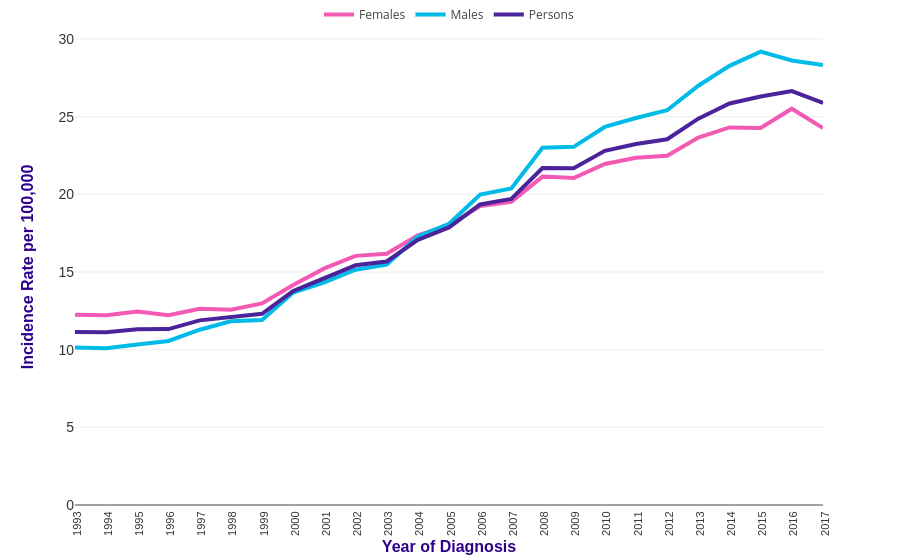 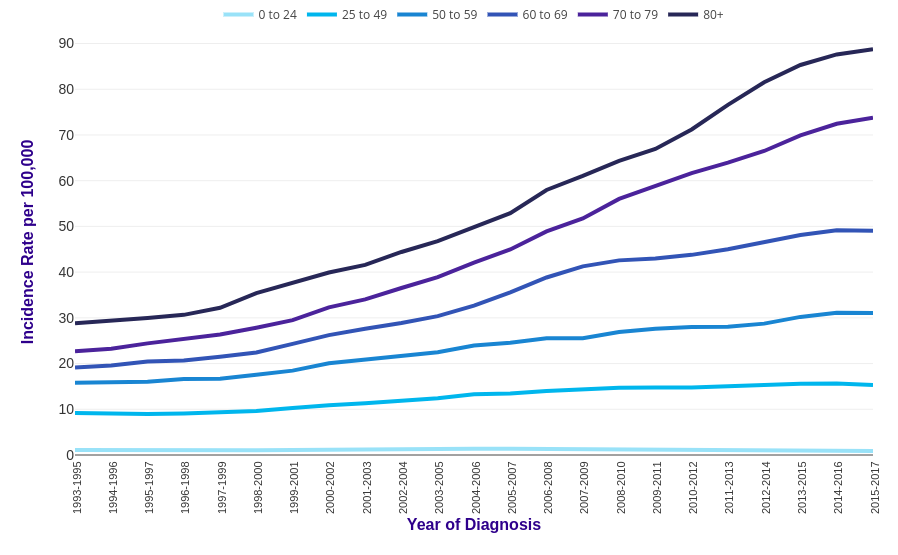 A moderate proportion (70%) of melanoma skin cancer cases in England have stage at diagnosis recorded.[1]

There are no differences in late stage at diagnosis for melanoma skin cancer between older adults aged 80+ and adults aged 60-79 in England.[1]

Stage at diagnosis by sex

Late stage at diagnosis of melanoma skin is associated with male sex in England. Among adults aged 15-99 in England, 10% of males are diagnosed at stage III or IV, versus 7% of females.[1]

These patterns by deprivation, age and sex are probably not explained by other demographic differences.[2]

View our patient information on staging for melanoma skin cancer

In females, the largest proportion of melanoma skin cancer cases occurs in the legs, with smaller proportions in the arms, trunk and head and neck (2010-2012).[1-4]

A small proportion of cases did not have the specific part of the body recorded in cancer registry data, or overlapped more than one part.[1-4]

It is estimated that there are around 4,000 fewer cases of melanoma skin cancer each year in England than there would be if every deprivation quintile had the same age-specific crude incidence rates as the least deprived quintile. Around 2,000 of these cases are in females, and around 2,000 in males. 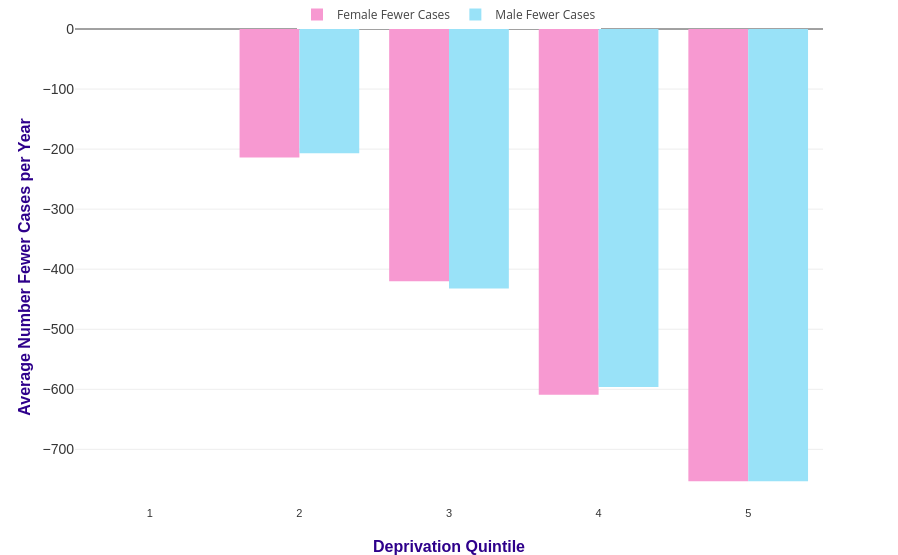 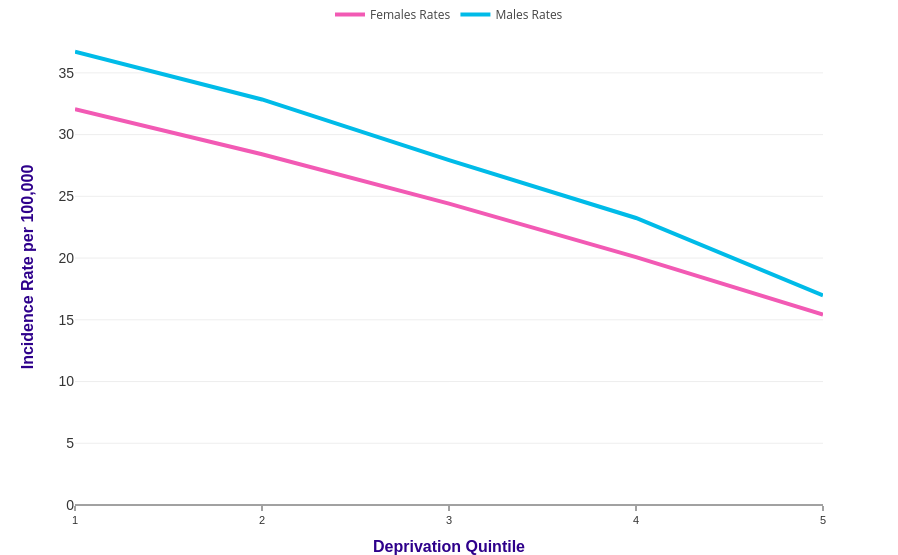 Ranges are given because of the analysis methodology used to account for missing and unknown data. For melanoma skin cancer, 38,097 cases were identified; 36% had no known ethnicity.