A trial of a vaccine called rindopepimut for glioblastoma (ACT IV)

This trial is looking at a new treatment vaccine called rindopepimut alongside temozolomide for people with a type of brain tumour called glioblastoma.

If you are diagnosed with a glioblastoma, you usually have surgery followed by radiotherapy and chemotherapy at the same time. Temozolomide is a chemotherapy drug that doctors often use. It is a

. After you finish radiotherapy, you may have temozolomide on its own. This is called adjuvant or maintenance treatment.

In this trial, researchers are looking at a new treatment vaccine called rindopepimut alongside temozolomide. Rindopepimut (also known as CDX-110) is a type of biological therapy called a cancer vaccine.

Between a quarter and a third of all glioblastomas may contain a particular protein called EGFRvIII. Rindopepimut is being tested to see if it can train the immune system to recognise this protein and kill the glioblastoma cells. Everybody taking part in this trial will have a test first to confirm if their glioblastoma contains the protein. The aim of the trial is to see if rindopepimut alongside temozolomide helps this group of people. The researchers want to

This phase 3 trial will recruit about 700 people. Everybody taking part has had radiotherapy and chemotherapy after surgery. And scans must show that their glioblastoma has not got bigger during this time.

Rindopepimut is made by attaching a piece of the glioma protein (EGFRvIII) to a compound called keyhole limpet haemocyanin or KLH. This is then mixed with a drug called granulocyte-macrophage colony stimulating factor (GM-CSF). Both KLH and GM-CSF help to activate the immune system.

People in both groups take temozolomide tablets for 5 days every 4 weeks. Each 4 week period is called a cycle of treatment. 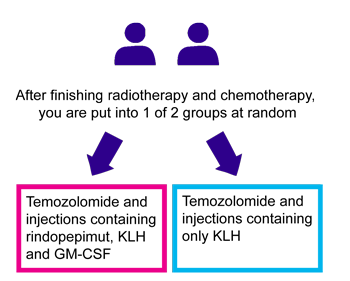 You start by having the injections twice, 2 weeks apart. About 2 weeks later, you start taking temozolomide. You then have the injections in the 3rd week of each 4 week treatment cycle.

The trial team will ask you to fill out a questionnaire before you start treatment, every month during treatment and after you finish treatment. The questionnaire will ask about side effects and how you’ve been feeling.  This is called a quality of life study.

The trial team will also take a sample of cells from the inside of your cheek. They will use these samples to look for certain genes that affect your immune system. This may help them to work out who is most likely to benefit from the trial treatment.

You go to hospital

You have blood tests at each visit. You have regular MRI scans throughout your treatment.

When you stop having the injections, you have another hospital visit 4 weeks later. Then you see the trial team every 3 months for the next 6 months. After that, they will contact you by phone every 3 months to see how you are.

If your glioblastoma gets worse and you have another biopsy or more surgery, the trial team will get a sample of the tissue that is removed.

Both rindopepimut and the injections containing only KLH can cause a skin reaction such as redness, itching and swelling. There is also a possibility that either injection could cause a more serious allergic reaction.

Rarely, rindopepimut can cause swelling in the brain leading to symptoms such as headache, confusion, fits (seizures), muscle weakness, unsteady walking, a lack of coordination or slurred speech. If this happens, you may have drugs such as steroids to reduce the swelling, or you may have surgery.

We have more information about the side effects of temozolomide in our cancer drugs section.