This trial is for men with prostate cancer that has spread and whose cancer no longer responds to hormone therapy. It is for men who haven’t had the chemotherapy drug docetaxel.

If prostate cancer has spread to another part of the body, doctors often treat it with hormone therapy. This can work well, but after a period of time the cancer can start to grow again. If this happens, men may have a drug called abiraterone. If you have abiraterone, you also take a steroid called prednisolone.

Sometimes you may also have another type of hormone therapy drug called enzalutamide.

Researchers want to see if having a new drug called idasanutlin (or RO5503781) alongside abiraterone and prednisolone or enzalutamide helps men with prostate cancer that has spread and is no longer responding to hormone therapy.

Cancer cells can switch off a protein called p53 which would normally signal that a faulty cell, such as a cancer cell should die. Idasanutlin is designed to switch this protein back on which means the cancer cells will stop growing and die.

The aims of this trial are to

This trial is in 2 parts called phase 1 and phase 2. The researchers need more than 120 men to take part.

In this phase, the researchers are trying to find the highest dose of RO5503781 that you can have safely alongside abiraterone and prednisolone or enzalutamide. This phase is in 2 parts:

Everybody joining part A has abiraterone, prednisolone and idasanutlin.

The first few men taking part will have a low dose of idasanutlin. If they don’t have any serious side effects, the next few patients will have a higher dose. And so on, until they find the best dose. This is called a dose escalation study.

You take abiraterone and prednisolone tablets every day. You take idasanutlin for 5 days every 4 weeks.

Everybody joining part B has enzalutamide and idasanutlin. You have the dose of idasanutlin found during part A.

You have enzalutamide tablets every day. And take idasanutlin tablets for 5 days every 4 weeks

In the 2nd phase of the trial, the researchers want to compare idasanutlin with a dummy drug (a

All the men joining this part of the trial have abiraterone and prednisolone or enzalutamide. Half of them will also have idasanutlin. The other half will have a dummy drug. 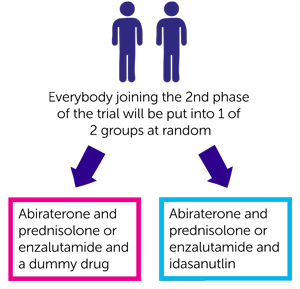 You take abiraterone and prednisolone or enzalutamide tablets every day. You take idasanutlin (or the dummy drug) for 5 days every 4 weeks.

Whichever phase of the trial you join, you can carry on having treatment until the trial doctors can tell that your cancer is getting worse.

You see the trial team and have a number of tests before you start treatment. The tests include

in the past. If there isn’t a stored sample available, they will ask you to have a new biopsy.

They may also ask you to have more biopsies from areas of cancer spread before you start treatment, during treatment and at the end of treatment. They will use these to see how the cancer responds to treatment. But you don’t have to have these biopsies if you don’t want to. You can still take part in the trial.

If you join the 1st part of the trial, you need to have a number of extra blood tests on 3 different days at the beginning of your treatment. On these days, you will be at hospital for a number of hours.

Everybody in the trial goes to hospital at least every 4 weeks during treatment. You have regular blood tests and the trial team will monitor your blood pressure.

You have a CT scan, and possibly a bone scan and MRI scan, every 8 weeks for the first 6 months, and then every 12 weeks for the rest of the time you take the tablets.

When you finish treatment, you will continue to see the trial team every 3 months until any side effects have got better or you start another treatment.

If you stop having the trial treatment for any reason other than your cancer getting worse, the trial team would like to see you every 6 weeks until you start another treatment.

As idasanutlin is a new drug, there may be side effects we don’t know about yet. In trials so far, the most common problems have been

We have information about