This trial wanted to see if giving aprepitant alongside other anti sickness drugs could help reduce sickness caused by chemotherapy.

A common side effect of chemotherapy is feeling or being sick. Ondansetron and dexamethasone are two drugs used to try to stop or reduce this type of sickness.

The main aims of this trial were to:

The trial team concluded that aprepitant together with ondansetron (and sometimes dexamethasone) can help children and young people having chemotherapy that is likely to make them feel or be very sick.

This was an international phase 3 trial. 307 children under the age of 18 took part.

Everyone had chemotherapy that is likely to make you feel or be very sick such as:

The research team looked at the number of children that took part in each group: 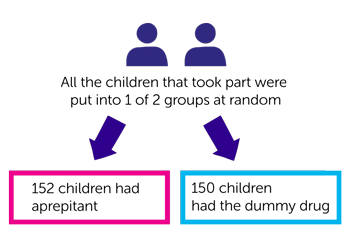 5 children didn’t have treatment with either aprepitant or the dummy drug.

The trial team looked at how well aprepitant worked. To do this they looked at the number of children who weren’t sick after chemotherapy. They found it was:

They also looked at the amount of time it took for children in both groups to be sick after chemotherapy. They found it was:

The trial team looked at the side effects from aprepitant or the dummy drug. They found that 5 out of 152 children (3%) in the aprepitant group had:

3 out of 150 children (2%) in the dummy drug group had sickness and a high level of liver enzymes in the blood.

The study team concluded that aprepitant can help to reduce sickness caused by chemotherapy in children and young adults.

"We believed that with the clinical trial, Katie had the best chance of recovery. Without these trials, amazing new treatments may never be found."