This trial was for people whose breast cancer has spread to the surrounding tissue (locally advanced) or to another part of the body (secondary breast cancer). They had already had treatment with both trastuzumab (Herceptin) and lapatinib.

Some breast cancers have large amounts of a protein called

on the surface of the cells. These cancers are HER2 positive. They can be treated with drugs that target the HER2 protein including:

People can also be treated different types of chemotherapy, including a drug called a

Trastuzumab emtansine is a combination of trastuzumab and the chemotherapy drug, DM1. Trastuzumab finds the cancer cells and delivers the DM1 to them. This type of drug is called a conjugated monoclonal antibody.

The people who took part in this trial had HER2 positive advanced breast cancer previously treated with trastuzumab, lapatinib and a taxane chemotherapy. The researchers found that trastuzumab emtansine worked well for this group of people.

602 people took part in the trial. 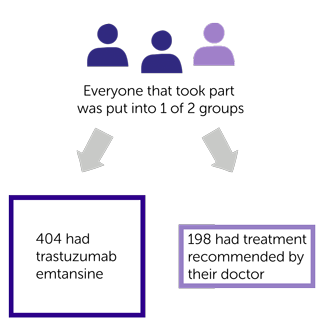 The researchers looked at the length of time it took before people’s cancer got worse. This is called progression free survival. This was:

The researchers also looked at the length of time people lived after treatment. This is called overall survival. This was:

The most common side effects of trastuzumab emtansine were:

The most common side effects from the treatment chosen by doctors included:

The researchers concluded that trastuzumab emtansine should be used as a

for people with advanced HER 2 positive breast cancers who have had previous treatment.