This trial looked at standard chemotherapy and rituximab with or without mitoxantrone for people with newly diagnosed chronic lymphocytic leukaemia (CLL).

Earlier trials suggested that adding a chemotherapy drug called mitoxantrone to FCR might be a useful treatment for CLL. Doctors call this combination FCM-R.

The doctors in this trial thought that this combination would help to lower the number of leukaemia cells that can be left behind after treatment. Remaining cancer cells are called ‘minimum residual disease’ or MRD. An undetectable MRD level means the leukaemia is less likely to come back.

The team found that FCM-R wasn’t better than FCR for people with newly diagnosed CLL.

This was a phase 2 trial. It was a randomised trial. The 215 people who took part were put into 1 of 2 treatment groups by a computer. Neither they or their doctor chose which group they were in: 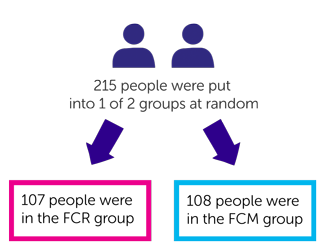 After treatment the team looked at how many people in each group had no sign of their leukaemia (a complete response). They found that:

3 months after finishing treatment everyone had a bone marrow test. This was to assess the minimum residual disease (MRD) in each group. They found that there was a very small amount or no MRD in:

After an average follow up of 5 years the researchers found no significant difference between the 2 groups when they looked at: