This trial is for women who are due to have an operation called a wide local excision to remove their breast cancer. It is for woman who have

Surgery is one of the main treatments for

. But it can be difficult for a surgeon to know whether they have taken out all of the breast cancer.

The surgeon aims to remove enough tissue so that there is a clear margin (there are no cancer cells) around the cancer. After your operation, an expert called a

examines the tissue. They check to make sure there is a clear margin.

Doctors want to find out whether a device called the LightPath Imaging System can help breast cancer surgeons decide whether they have removed all of the cancer during surgery.

Before your operation you have an injection of a substance called an imaging agent. This is a sugar substance containing a radioactive molecule that is taken up in active tissues, including many types of cancer.

This imaging agent is normally used during a diagnostic test called a PET scan. It helps to show your doctor where the cancer cells are.

LightPath works by detecting the small amount of light produced by the radioactive molecule within the imaging tracer. The surgeon can look at the pictures while they carry out the operation. The areas that are orange coloured or lit up in the pictures are more likely to be cancer. 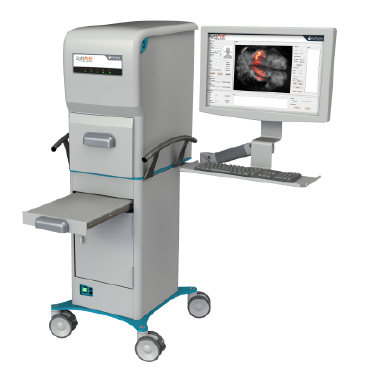 The aim of this trial is to find out whether the LightPath Imaging System can help surgeons remove all of the breast cancer. The trial team will also collect information about:

You may be able to join this trial if:

The researchers need 170 women to join this European trial.

When this trial first opened to recruitment there were 2 groups. It was a randomised trial and people were put into groups by a computer. 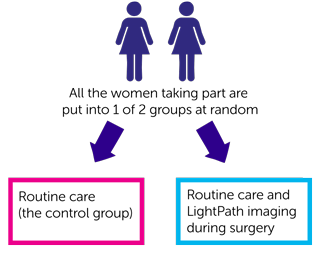 Please note, the control group has now closed to recruitment. Everyone joining this trial will now have routine care as well as LightPath Imaging System.

Just before your operation you have an injection of an imaging tracer called 18F-FDG. You have this injection through a small plastic tube called a

As part of your routine care, you might have your lymph nodes checked with a sentinel lymph node biopsy. If so, you also have an injection containing a different type of radioactive molecule. This is called technetium. As you are having LightPath Imaging, you are given more of this imaging agent than normal. The LightPath device might also be used to look at any lymph nodes removed during your operation.

All women will have a pregnancy test if there is a chance you could become pregnant. This is because of a risk that the radiation (from technetium or 18F-FDG) could harm the baby.

Before surgery, you go to hospital to meet with a member of the trial team. This is arranged for a time when you also have a routine appointment. So you don’t have to make an extra visit. The trial team:

You have some routine tests as part of your preparation for breast surgery. These tests are part of your routine care and not part of this trial. Your doctor or specialist nurse will tell you more about this.

After your operation the trial team will collect information on:

You see your surgeon 1 to 6 weeks after your operation. How soon you see them depends on your hospital’s policy. At this meeting they will let you know if you need to have another operation.

The risks of your breast cancer surgery include:

If you are in the group having the LightPath Imaging System, you are exposed to some extra radiation as a result of having the radioactive tracer. Although high levels of radiation can cause cancer, the amount used in this trial is small.

Technetium is routinely used to carry out a sentinel lymph node biopsy in people with breast cancer. But the amount you have in this trial is higher than the amount used in standard care.

The amount of radiation you are exposed to in this trial is less than the radiation you would have from a CT scan of your chest and tummy. The trial team will explain the risk and benefits and what this means for you.

If you are in group using the LightPath Imaging System, it might mean your surgeon can avoid a second operation but we don’t know this for sure. This is what this trial is trying to find out.