This trial was looking at a tube called a bronchial stent to see if it could relieve breathlessness. It was for people with a type of lung cancer called non small cell lung cancer (NSCLC).

Sometimes, lung cancer can partly or completely block the main airways of the lungs (the windpipe or main bronchus). This can cause shortness of breath.

Doctors can give radiotherapy or chemotherapy to control the growth of the cancer. But these may not work well, or you may not be able to have these treatments.

Another way to unblock the airway is to have a bronchial stent. You have a bronchoscopy and a stent put in the blocked airway to open it up. 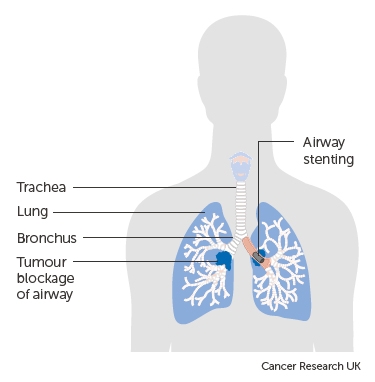 Putting in a stent is not usually the first treatment offered. But doctors think using a stent before any other treatment may relieve breathlessness.

The researchers also looked at whether having a stent improved the quality of life of those taking part. For example, if it helped with daily activities such as walking.

The trial team found no difference in symptoms between those people who had a bronchial stent and those who didn’t. The team also found that it was difficult to find people who wanted to take part in this trial.

This was a phase 3 trial. The trial was randomised. This means the people taking part were put into 1 of 2 groups by a computer. Neither they nor their doctor chose which group they were in. But people were told which treatment they were going to have. 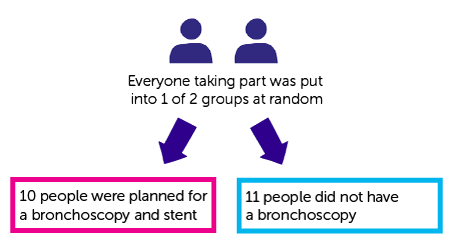 People in both groups had various tests and assessments at different points during the trial. The researchers looked at

The researchers did not find any significant difference between the 2 groups.

19 of the 21 people who took part went on to have further treatment after the trial. This suggests that most remained reasonably fit and well during the treatment and for a period of time afterwards.

The researchers thought it was important to record the reasons for people not taking part. They believe this can help doctors to plan trials in the future.

This trial team tried to compare stenting with no stenting. They recommend that a future trial could look at the benefits of any treatment that helps to unblock an airway.  For example, surgery to remove the cancer or laser treatment.

It is not always possible for a doctor to know which treatment is going to help until a bronchoscopy is carried out. In a future trial, if people know that they may have 1 of a range of treatment options, the trial may be able to get more people to take part.

) but may not have been published in a medical journal. The figures we quote above were provided by the research team. We have not analysed the data ourselves.