This summary is 1 of 3 summaries of the MyeChild01 trial. We have information on:

This study is for children and young people who haven’t reached their 18th birthday. We use the term ‘you’ in the summary but if you are a parent we are referring to your child.

After each stage doctors do some tests to work out the risk of your leukaemia coming back. Your doctor might suggest you have a stem cell transplant if you are at high risk.

You have a combination of chemotherapy drugs before the stem cell transplant. This is called conditioning chemotherapy.

for this is called myeloablative conditioning (MAC). This works but it has many side effects.

Reduced intensity conditioning (RIC) is another combination of chemotherapy drugs that doctors might use.

Research suggests that RIC might be as good as MAC. And because it isn’t as severe as MAC it has fewer side effects. But there haven’t been any large randomised clinical trials to show this.

In this trial researchers want to compare MAC with RIC. The combination of chemotherapy drugs they will use is:

The aims of the trial are to find:

And all of the following must apply:

You cannot join this trial if any of these apply. You:

This is an international phase 3 trial. In the UK the trial team need 60 children and young people to join this part of the MyeChild01 trial.

This is a randomised trial. People taking part are put into treatment groups by a computer. Neither you nor your doctor can choose which group you are in. 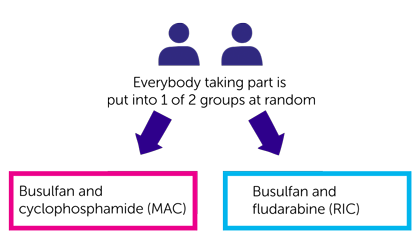 You have all your treatment as a drip through a central line. You have the treatment  given over 10 days before your transplant.

. These might be taken at the same time as the routine samples are taken.

They use some of the samples to look at different ways to measure how the leukaemia has responded to treatment. They hope this will help them identify people who are at a greater risk of their leukaemia coming back after treatment.

You have all your treatment as an inpatient in the hospital.

Before starting treatment you have the following tests:

After you have completed all your treatment you see the doctor:

And have the following tests:

The side effects of having a stem cell transplant include:

We have more information on the side effects of a stem cell transplant.

Your doctor will talk to you about the side effects and risks of having a stem cell transplant before you agree to take part.

You can read more information about the trial on the MyeChild01 website.