A serious side effect of rectal cancer surgery is a leak from where 2 bits of bowel have been joined. This is called an anastomotic leak. This study wants to see if a new technology can help reduce this.

The main treatment for rectal cancer is surgery. During the surgery, the surgeon removes the piece of bowel which contains the cancer and joins the bowel back together. This join is called anastomosis.

A serious side effect of this surgery is a leak from where the 2 parts of bowel have been joined. This is called an anastomotic leak. It develops when the join in the bowel doesn’t heal properly after surgery. This can cause long term side effects.

These long term side effects include:

The researchers think that one possible cause of an anastomotic leak is that the blood supply is poor in the join of the bowel after surgery.

The study team want to look at reducing this side effect. They want to use a new technology called Intraoperative Fluorescence Angiography (IFA) during the operation. This is a dye which is injected into the blood and makes it glow. It shows the surgeons the blood supply around the join which can help them make decisions during the operation.

They also want to look into the:

The following bullet points list the entry conditions for this study. Talk to your doctor or the study team if you are unsure about any of these. They will be able to advise you.

Who can take part
You may be able to join this study if all of the following apply. You:

Who can’t take part
You cannot join this study if any of these apply. You:

The study team want to recruit 880 people across Europe. It is randomised. The people taking part are put into 1 of 2 groups at random. Neither you nor your doctor will be able to decide which group you are in.

Both groups have a contrast enema around 4 to 6 weeks after the operation. 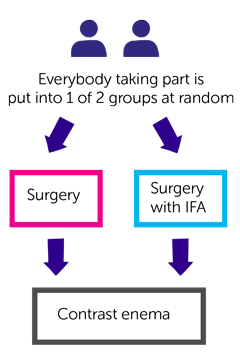 There are 2 sub studies in this trial which look into more detail as to why some people have an anastomotic leak and others don’t.

Microbiome sub study
This is for the first 200 people who are recruited in the UK for either group. The study team look at the bacteria within the rectum. To do this, they take a poo (stool) sample before, during and 3 to 5 days after the operation from within the bowel.

To collect the sample a doctor will use a special camera called a proctoscope. They put this into your back passage and collect a small sample of poo. It takes about 1 minute and should not cause any pain.

Perfusion sub study
This is for 75 people who are already taking part in this trial. Everyone must be having treatment at a UK hospital and having surgery with IFA. It is optional so you can say whether you would like to take part or not.

The study team look at the blood supply which goes to the bowel in more detail. For this you have CT scans before your operation

You see the doctor and have some tests before you can take part in the study. The tests include:

If you are part of the perfusion sub study then you have two additional specialised CT scans.

If you are part of the microbiome sub study, a doctor will take a poo sample from you before, during and 3 to 5 days after the operation.

Follow up
Everyone taking part has a contrast enema scan 4 to 6 weeks after their operation.

30 days and 90 days after your operation you will have a follow up appointment to see how you are.

The possible side effects are the same as any rectal cancer surgery and include: