This trial looked at a drug called ipilimumab alongside chemotherapy for people recently diagnosed with small cell lung cancer (SCLC).

Everyone who took part had SCLC that had spread into the

outside the lung or to other body organs. This is extensive stage SCLC.

In this trial researchers looked at a targeted cancer drug (biological therapy) called ipilimumab (Yervoy). It targets cancer cells by looking for a particular protein called CTLA-4. Ipilimumab stops CTLA-4 from switching off part of the

. So it might help the immune system to destroy cancer cells.

The main aim of this trial was to see if chemotherapy and ipilimumab is better than chemotherapy alone for people who have been recently diagnosed with extensive stage SCLC.

The trial team concluded that chemotherapy and ipilimumab is not better than chemotherapy alone at helping people with recently diagnosed extensive stage SCLC.

This was an international phase 3 trial. 1123 people took part.

It was a randomised trial. Everyone was put into 1 of the following treatment groups by computer:

The research team looked at the number of people that took part in each group: 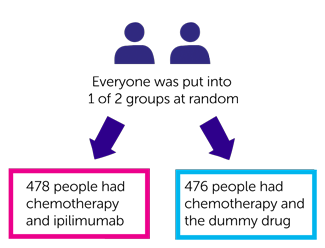 The study team looked at how well the treatment worked. To do this they looked at the average length of time people lived without any signs of their cancer getting worse. This is called progression free survival. They found it was:

They also looked at the amount of time people lived. This is called overall survival. They found it was around 11 months for both groups.

The trial team looked at the side effects people had. The most common side effects for the chemotherapy and ipilimumab group were:

The most common side effect for the chemotherapy and dummy drug group was a drop in blood cells causing a risk of infection, tiredness and breathlessness.

The trial team concluded that chemotherapy and ipilimumab is not better than chemotherapy alone at treating extensive stage SCLC. And people had worse side effects.

Researchers aren’t too sure why ipilimumab didn’t help people with extensive stage SCLC. One possible reason is that chemotherapy reduces the number of immune cells and this may stop ipilimumab (which stimulates the immune system to kill cancer cells) from working well. There is research going on looking at using ipilimumab with other types of targeted cancer drugs for people with SCLC.