This trial looked at intensity modulated radiotherapy to treat prostate cancer which was likely to spread to the lymph nodes in the pelvis. It was supported by Cancer Research UK.

Intensity modulated radiotherapy (IMRT) is a way of targeting the area of prostate cancer more exactly. This means that doctors are able to give a larger dose of radiotherapy to the cancer and a lower dose to surrounding healthy tissue. The aim of this is to reduce side effects of radiotherapy.

Researchers running this trial looked at several different doses of radiotherapy. Radiotherapy doses are measured in Gray (Gy). You often have radiotherapy split into several doses of a few Gray each time.

There were 5 groups in this trial, each group had slightly different doses of radiotherapy. Everyone had radiotherapy to the prostate and to the lymph nodes in the pelvic area around the prostate.

The aim of this trial was to find out more about different doses of IMRT for prostate cancer.

This trial recruited 447 men into 5 groups. Everyone taking part had IMRT, but the number of treatments and the dose per treatment varied a bit between the groups. 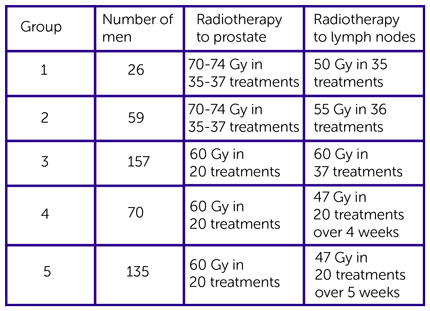 Radiotherapy for prostate cancer can cause side effects such as problems with the bowel and bladder. There wasn’t much difference between the number of men who were having side effects 2 years after treatment:

The research team then looked at how well the treatment had worked 5 years after joining the trial.

They looked at how many men had no signs that the cancer had started to grow again, and found it was:

The researchers found that more than 9 out of 10 men (94%) had no signs of cancer in the lymph nodes in the pelvis.

They also looked at how many men were living 5 years after joining the trial. They found it was similar or better than men who have been treated with standard radiotherapy (not IMRT) in other trials or as standard treatment:

The research team concluded that using IMRT to treat lymph nodes in the pelvic area was safe, and didn’t cause too many side effects. The radiotherapy methods developed by the research team are now being used in other trials.