This trial looked at whether aspirin can reduce hearing loss in people having cisplatin for the first time.

Cisplatin is a chemotherapy drug used to treat different types of cancer.

All chemotherapy drugs have side effects and a common effect from cisplatin is hearing loss. This happens to some degree in about half the people who have this drug.

We know from laboratory research that aspirin may be able to reduce hearing loss caused by cisplatin. But doctors wanted to find out for sure.

The aim of this trial was to see if taking aspirin each time you have cisplatin helps to reduce hearing loss.

The study team concluded that aspirin does not help to reduce hearing loss caused by cisplatin.

This was a phase 2 trial. 94 people who were going to have cisplatin for the first time took part. There were:

The team looked at the number of people that took part in each group: 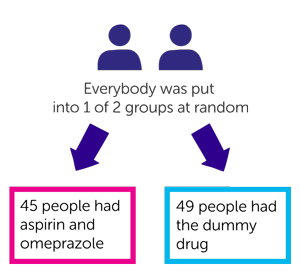 Everyone had aspirin or a dummy drug for 4 to 5 days, each time they had cisplatin.

They also found that:

The trial team concluded that aspirin does not help to reduce hearing loss caused by treatment with cisplatin.