This trial compared binimetinib with dacarbazine for melanoma that can’t be removed with surgery, or has spread to another part of the body. It was for people who have melanoma with a change in a gene called NRAS.

Doctors sometimes use a chemotherapy drug called dacarbazine to treat advanced melanoma that has spread or can’t be removed with surgery. But researchers are looking for new treatments to help people in this situation. In this trial they looked at a drug called binimetinib (MEK162).

Binimetinib is a cancer growth blocker. It stops signals that cancer cells use to divide and grow. Researchers hoped that binimetinib would help people who have melanoma with a change (mutation) in a gene called NRAS.

The aim of this trial was to see if binimetinib works better than dacarbazine for this group of people.

Results
This trial recruited 402 people with advanced melanoma that could not be removed with surgery or had spread to another part of the body. They all had a change in a gene called NRAS.

The people taking part were put into one of two groups at random, and: 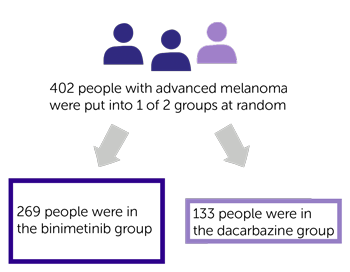 The research team looked at how long it was until the cancer started to grow again. They found the most common length of time was:

The research team also looked at how well the treatment worked, but they don’t have these results for everyone who took part.

They found that in the binimetinib group, the melanoma:

And in the dacarbazine group, the melanoma:

They also looked at the most common length of time people in each group lived for. It is difficult to say for sure how much trial treatments affected this, because people often had other treatments after they stopped the trial treatment. But they found it was similar in both groups:

Side effects
They found that people who had binimetinib had more serious and non serious side effects than those who had dacarbazine. But these were often manageable.

The most common side effects of binimetinib were:

Conclusion
The research team concluded that binimetinib stopped melanoma growing for longer than dacarbazine. And that it could be a useful treatment option for people with advanced melanoma and a change in the NRAS gene.