This trial looked at rucaparib for women whose ovarian cancer had got smaller or gone away after platinum chemotherapy.

Ovarian cancer, fallopian tube cancer and primary peritoneal cancer are all similar and are treated in the same way. So when we use the term ovarian cancer in this summary, we are referring to all 3.

Ovarian cancer often responds well to chemotherapy that includes a platinum drug such as carboplatin. But after a while it may start growing again.

In this trial, researchers looked at rucaparib for women whose cancer had got smaller or gone away after at least two courses of platinum chemotherapy.

The main aim of this trial was to see whether rucaparib helped stop ovarian cancer coming back after it has responded to platinum chemotherapy.

This trial recruited 564 women with advanced ovarian cancer that had stopped growing or had gone away after treatment with platinum chemotherapy.

The women taking part were put into 1 of 2 groups at random, and: 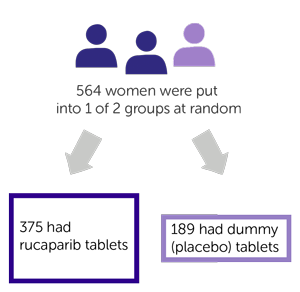 The research team looked at how long it was before the cancer started to grow again, and found it was:

When they looked in more detail at women who had a change in a gene called BRCA, it was:

207 of the women taking part had an area of cancer that could be measured on a scan. The scan results showed that, after treatment, the cancer had got smaller in:

When the research team analysed the results in 2017, it was a bit too early to see if the women in one group are likely to live longer than the other. They found that about 2 out of 10 women (22%) in each group had died. They will look at this again in future to see if there is any difference between the two groups. We plan to update this page once these results are available.

The research team concluded that rucaparib increased the amount of time before ovarian cancer started to grow again. They suggest that it could be useful for women whose cancer responds to at least two courses of platinum chemotherapy.