This trial is investigating whether the hormone treatment enzalutamide is a useful treatment for women with breast cancer before they have surgery.

It is for women with one of the following

Androgens are a group of hormones made in both men and women. Enzalutamide is a hormone therapy that targets androgens. It is already used to treat men with prostate cancer. Doctors want to find out if it would be useful for women with triple negative breast cancer.

Another type of hormone therapy called exemestane is sometimes used to shrink oestrogen positive breast cancer before surgery. Doctors want to know whether adding enzalutamide to exemestane will shrink it further.

As well as the above, all of the following apply. You

Oestrogen (ER) positive breast cancer
This part of the trial is randomised. The people taking part are put into 1 of 2 treatment groups by a computer. Neither you nor your doctor will be able to decide which group you are in.

Twice as many people are in the group having enzalutamide and exemestane. 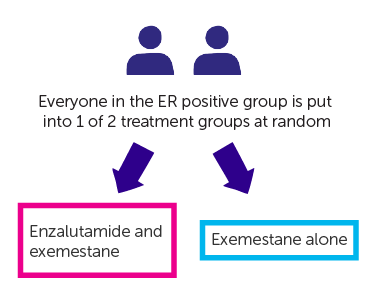 You have enzalutamide and exemestane as capsules.

If you have the 2 drugs together, you take

You have these every day at the same time.

If you have exemestane alone, you take 1capsule at the same time each day.

Enzalutamide decreases the body’s ability to take up exemestane. So people in the group taking enzalutamide need to take twice as much exemestane. This way, people in both groups are getting similar amounts of exemestane.

Everyone
Everyone has treatment for between 15 and 29 days. This depends on when you are due to have either your surgery or start chemotherapy.

You have the surgery or chemotherapy as recommended by your doctor.

Before treatment starts, the trial team look at a sample of your cancer removed when you had a

. If a sample is not available, you need to have a biopsy as part of the trial. This would be similar procedure to the biopsy you had when you were first diagnosed with breast cancer.

You go to hospital to see the trial doctor and have some blood tests before you start treatment. The doctor will ask you about any other medical conditions and any medicines you are taking.

As well as routine blood tests, you have some blood samples taken for research at the beginning and end of treatment. The researchers use these samples to

Where possible, these will be taken at the same time as your routine blood tests.

After treatment
When you have surgery, the surgeon will collect some tissue samples from your cancer during your operation. The trial team will look at these to find how the drugs have affected the cancer.

Your doctor may recommend that you have chemotherapy before your surgery. If so, you have an extra biopsy once you have finished treatment in this trial and before you start chemotherapy

You have your final appointment with the trial team about 1 month after you have finish treatment as part of this trial. The doctor will ask you about side effects and check on your general health.

The most common side effects of enzalutamide include

The most common side effects of exemestane include

We have more information about