Where cancer can spread

This page tells you about where cancers can spread. There is information about

Places cancers can spread to

Cells can break away from a cancer and spread in the blood or lymphatic systems to almost anywhere in the body. But most types of cancer tend to spread most often to one or 2 places. 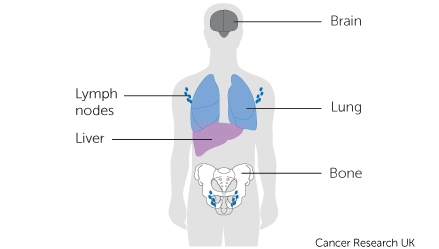 You can read about how cancer can spread.

The lungs are the most common organ for cancers to spread to. This is because the blood from most parts of the body flows back to the heart and then to the lungs. Cancer cells that have entered the bloodstream can get stuck in the small blood vessels (capillaries) of the lungs.

Cancer spread to the lungs may not cause any symptoms or it may cause: 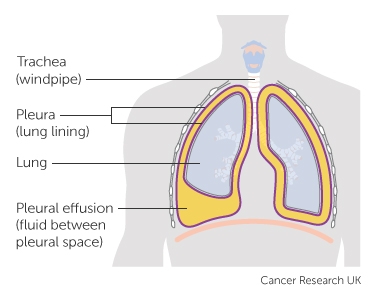 Fluid builds up because cancer cells can cause inflammation in the 2 sheets of tissue that cover the lungs (the pleural membrane). The inflamed tissues make extra fluid and the fluid collects between the membranes. There may also be cancer cells in the pleural space that stop the extra fluid draining away.

The lungs expand (inflate) as we breathe in. This fluid build up gets in their way and presses on the lungs, stopping them from expanding fully.

You can read about treatment to drain fluid on the lung.

Many types of cancer can spread to the liver. However, it is most likely to happen in cancers of the digestive system. This is because the blood from the digestive system circulates through the liver before it goes back to the heart. The cancer cells may get stuck in the small capillaries of the liver.

Cancer that has spread to the liver may not cause any symptoms. But it may cause:

Ascites is the name for a build up of fluid in the tummy (abdomen). The abdomen contains many organs such as the stomach, bowels and liver. These organs are covered by a sheet of tissue (membrane) called peritoneum. 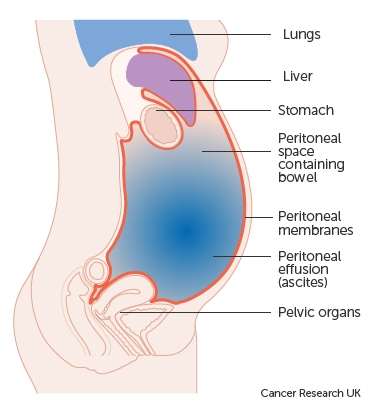 You can read about fluid in the abdomen and its treatment.

It's very common for cancer cells to travel from where they started in the body, to nearby lymph nodes. This is because there is a natural circulation of tissue fluid from the organs into the lymphatic system. This is not the same as having a cancer of the lymphatic system, such as lymphoma.

When cancer spreads to the lymph nodes it may make them swell up. The swollen lymph nodes are easy to see if they are near the surface of the body – for example, in the neck or under the arm. But if the nodes are deeper in the body, they can only be seen on a scan.

You can read detailed information about lymphoedema.

Some cancers are likely to spread to the bones – for example, prostate cancer, breast cancer and lung cancer.

The most common effects of secondary cancer in the bones are:

Pain happens because the cancer cells multiply in the bone and press on nerves. The growing cancer can weaken the bone by damaging its normal structure. This can make the bone more likely to break (a pathological fracture).

You can find out about secondary bone cancers and their treatment.

Damaged bone cells can release calcium into the blood. High levels of calcium in the blood may cause:

If the calcium levels become very high, they can cause irritability, confusion and eventually unconsciousness.

High levels of calcium can also be caused by tumours producing hormones, even when they haven't spread to the bone.

We have information about cancer and high blood calcium levels.

The most common symptoms are headaches and feeling sick. These symptoms happen because there is a limited amount of space for the brain. So, the growing cancer causes an increase in pressure inside the skull. This is called raised intracranial pressure.

Other symptoms depend on which part of the brain the cancer is growing in. They also depend on the size of the tumour (or tumours). Small secondary brain tumours may not cause many symptoms. Or it may cause:

You can read about secondary brain tumours and their treatment.

A secondary skin cancer may look like a pink or red raised lump (a bit like a boil). Doctors may call these areas plaques or nodules. It is important to tell your doctor if you think you have one as they can give you treatment. Without treatment, the area may become bigger and may bleed or ooze fluid. This is called an ulcerating cancer.

You can read about ulcerating cancer.