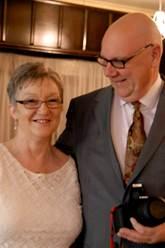 Margaret was diagnosed with oesophageal cancer in 2012. She had chemotherapy and surgery and is now free of the signs of cancer.

She lives with her husband Dave and has 4 adult children and 8 grandchildren. She's a huge Stoke City fan and she enjoys looking after rescue animals.

"I suddenly had terrible stabbing pains in my chest. I was driving at the time but I was on a dual carriageway and couldn't stop. I managed to get home but then the pains were so severe I couldn't get out of the car to get in the house.

"My husband rang my GP who said it could be a heart attack and I was rushed by ambulance to A&E. But the ECG showed it wasn't my heart. That happened three times - I couldn't breathe and the pain made me feel sick and dizzy.

"I knew by then something was badly wrong. If it wasn't a heart attack then what was it? I went back to the surgery and saw a new GP. She examined my stomach and said I would need an endoscopy.

"I had the endoscopy and they told me there and then I had a very large tumour that must have been there 12 months or more. Luckily my husband had gone with me. When they called him in from the waiting room I knew it was bad news.

"I went into shock. I actually looked round to see who they were talking to. I couldn't believe it was me that had cancer.

"But once I had a diagnosis, everything moved on quickly. I had a CT scan, another endoscopy to measure the size of the tumour (14cm) and a PET scan to see if had spread.

"I found it agonising waiting for the results. I just wanted something doing - I kept thinking, it's six weeks on and it's still growing.

"Because the tumour was so large they said they wouldn't be able to operate and I thought, 'Well that's it then, I've had it'. But they said if I had another endoscopy it would tell them either way.

"I began pre-operative chemotherapy in April 2012 to try and shrink the tumour. I had that for three months, then a five week break, then the operation."

Margaret took part in a clinical trial which was testing adding a new drug to chemotherapy - as part of the randomised trial she wasn't given the new drug, but will continue to be monitored for the rest of her life.

"After my chemotherapy, the tumour had really shrunk but the operation was still major surgery.

"I had a scar from my shoulder that goes under my arm to my ribs and a scar on my stomach from my navel up towards my breastbone. I was in special care unit for a week, then I spent a further week on a main ward before I could go home."

Five weeks after Margaret had returned home she began her post-surgery chemotherapy for a further three months, having the same regime as before. This time the side effects were worse than the exhaustion she had felt the first time.

Coping with side effects

"I had my chemo dose reduced by 10 per cent when I saw my Oncologist for my review. A couple of times I said I wanted to stop the chemo but my daughter would always talk me out of it so I carried on, I am so glad that I did.

"I did go back to work because I was really keen to get back to normal. I think I was trying to act as if I'd never had cancer but I'm starting to realise I can't do everything and I may need to think about giving up work or changing to something less challenging.
"I am now off work due to fatigue and the breathlessness I still experience and I also have some pain if I push myself to do certain things."

Support from family and friends

"The first time I went to the cancer unit, I couldn't go in, I was in total denial. My daughter was with me and literally pushed me in - it's a good job the doors were automatic!

"All through my treatment I had support from my husband, daughters and friends who were always visiting me in hospital and at home.

"My daughter's been brilliant throughout and is still here whenever I need her for support or just an ear to listen if I'm feeling down and share my good days with too.

"She tells me how proud she is of me for being a fighter but I am so proud to have a daughter who cared so much and for being so supportive despite having a job and a family of her own to care for.