Email us for more info

or to stay up to date

Our Cascade initiative, in partnership with RCGP, aims to support and empower cancer champions working in primary care to drive improvement in cancer control within the regions in which they work.

Workshops typically have up to 30 participants, including practitioners, health service planners/commissioners, and individuals working in public health. Our sessions tend to be interactive, including a mix of expert presentation and group discussion.

Who is Cascade for?

Cascade is a free event suitable for those in a position of influence to change cancer delivery and care. Previous attendees have included GPs, health service planners/commissioners, and individuals working in public health.

The first Cascade workshop was held on 30 April 2013 at the RCGP offices in London. Further workshops followed in Leeds in November 2013, Manchester (March 2014) and Birmingham (November 2014).

By 2015, Cascade was becoming a more established forum for influencing uptake of prevention and early diagnosis agendas within primary care by supporting networking and sharing among cancer ‘champions’. Participants have included Strategic GP Cancer Leads (individuals with sessions funded by Cancer Research UK within Strategic Clinical Networks) as well as an extended community of GP cancer leads, and individuals from CCGs, SCNs and public health with a specific cancer remit.

Influence has been provided through networking workshops run in different locations around England. Workshop agendas have varied but in 2015 have started to follow a standard format, drawing on national leaders to present new information about strategic priorities in cancer and encouraging peer discussion about challenges and solutions.

The Cascade name describes our approach. Through our workshops, and other communications activity, we aim to provide a forum that will inform and empower cancer champions and leaders to drive local and regional change. With this in mind, we need to provide these champions with:

We encourage speakers to take an interactive approach to presentations – inviting questions from participants as well as challenging the audience to reflect on information presented and discuss implications and challenges based on their local context. 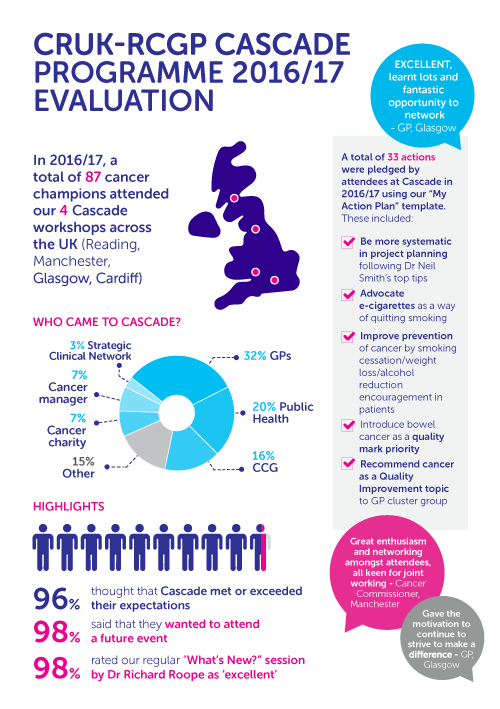 Watch a video about our Cancer Cascade workshops for cancer champions working in primary care.

This module is hosted by the Royal College of General Practitioners (RCGP).

Previous Cascade bulletins and our other newsletters

Learn about our Cascade workshops