To see all the findings of the National Cancer Diagnosis Audit

The most recent round of the National Cancer Diagnosis Audit (NCDA) combined data from primary and secondary care on patients diagnosed in 2014. The key findings from the audit show:

Summary of the audit findings for England

The National Cancer Diagnosis Audit (NCDA) collected data on 17042 patients who were diagnosed with cancer in 2014 from 439 English practices.

The key findings from the English audit show:

The audit findings highlight that co-morbidities are common among people diagnosed with cancer. Most patients (76%) had at least one co-morbidity and one in five (21%) had 3 or more co-morbidities. 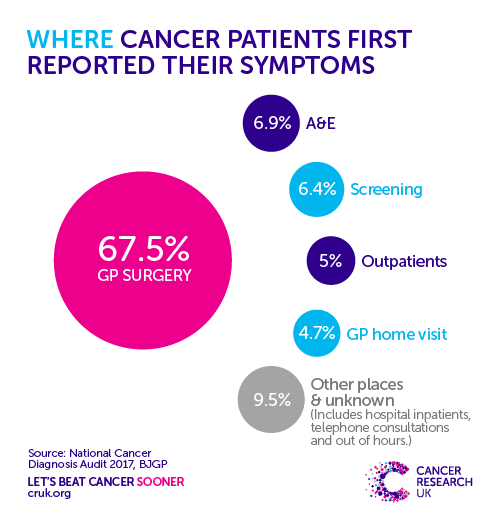 Three in four patients (74%) were referred to a specialist after only one or two consultations with a GP, and around half (52%) were referred through the Two Week Wait route. Most patients were referred promptly, as the median primary care interval (number of days from first presentation to first referral) was only 5 days.

Just under half (45%) of patients had investigations ordered by their GP before being referred, such as blood tests or scans.

The median diagnostic interval (number of days from first relevant presentation to the date of diagnosis) for all patients was 40 days.

For one in five patients (22%) the GP considered there to be an avoidable delay in the patient receiving their diagnosis. The audit showed that delay could happen anywhere on the patient pathway. Identifying where and how such delays happen can help to address any issues and speed up diagnosis in future.

Safety netting was recorded for just under half (44%) of all patients.

The findings highlight examples of good practice, identify areas for quality improvement with the aim to help health professionals to diagnose cancer earlier. The data also provide a baseline for future audit of the impact of 2015 NICE guidance on management and referral of suspected cancer.

Impact of the NCDA in England

Early diagnosis of cancer is critical to drive improvement in patient experience and outcomes. To better understand patient pathways to cancer diagnosis and to inform quality improvement efforts, the National Cancer Diagnosis Audit (NCDA) collected data on 17,042 cancer patients diagnosed in 2014 from 439 GP practices in England.

The audit had a strong quality improvement (QI) component and participating practices were encouraged to use the audit results to highlight and share good practice, and identify areas for improvement. Practices reported a number of QI activities based on audit results, including changes to referral behaviour, safety netting protocols and bowel screening promotion. CCG-level and regional level feedback was also made available where possible to strengthen local cancer intelligence and inform service improvement initiatives beyond practice-level.

The audit results were presented at a number of national and international conferences in 2017 and 2018. The paper outlining the key findings, published in the BJGP in December 2017, received attention in the national and professional press, as well as on social media.

Summary of the audit findings for Scotland

The National Cancer Diagnosis Audit (NCDA) collected data on 2014 patients who were diagnosed with cancer in 2014 from 73 Scottish practices.

The key findings from the Scottish audit show:

What support is available for GPs?

Cancer Research UK Facilitators and Macmillan GPs are available for in-depth discussions about the NCDA findings.

Read coverage of the audit results in GP Online

Read coverage of the audit results in Pulse

For questions and queries about the NCDA results, contact your local Cancer Research UK facilitator or email us