Bowel cancer briefing sheets and marketing materials (e.g. leaflets and posters) are available on the resources and tools page.

​The information on this page aims to provide those who are interested in learning about previous Be Clear on Cancer campaigns, or who are planning local activity to raise awareness of bowel cancer symptoms, with an overview of the most recent national 'reminder' bowel cancer campaign, which ran from August to September 2012.

Where did activities take place and when?

A follow-up national campaign then ran from 28 August until the end of September 2012. The adverts appeared on TV and radio. The advertising was a little less intense than the first national bowel campaign.

What is the main message of the campaign?

The campaign highlights two key symptoms of bowel cancer: See your doctor straight away if, for the last three weeks, you’ve had blood in your poo or looser poo.

The aim of the campaign is to encourage more people with these symptoms to go and see their GP earlier.

Why does the campaign focus on the symptoms 'blood in poo' and 'looser poo'?

The Department of Health reviewed the latest evidence and engaged with clinical experts when deciding which key symptoms to focus on. The campaign focuses on the symptoms ‘blood in poo’ and ‘looser poo’ that have persisted for 3 or more weeks, because these are the most common in those diagnosed with bowel cancer.

Although NICE Guidelines state that patients should have these symptoms for six weeks, the campaign advises people with the key symptoms to see their GP after only three weeks. It is hoped that this shorter timescale will encourage people with potentially serious symptoms to go and see their GP promptly.

There are other symptoms of bowel cancer highlighted in the public-facing materials and on NHS Choices:

Why does the campaign use the word 'poo'?

Public Health England and the Department of Health aim to use everyday language to help people feel more comfortable when discussing symptoms of bowel cancer with their GP. During development of the creative materials, a number of different terms were tested with the target audience and feedback showed that 'poo' was the most commonly used term.

Who is the campaign aimed at?

Men and women from lower socioeconomic groups over the age of 55, and the people who influence them, such as friends and family.

Who is most at risk?

Bowel cancer affects both men and women but is more common in older age, with 90% of people diagnosed aged over 55. Risk factors include diet (eating too much red or processed meat and too little fruit and vegetables), being overweight or obese, low levels of physical activity, drinking alcohol and smoking.

Those with a family history of bowel cancer are also more at risk, especially people with a first degree relative diagnosed with the disease (for example, a parent or sibling).

Why is there no mention of bowel screening in the advertising?

Screening is a very important part of diagnosing bowel cancer early and it is referenced in the Be Clear on Cancer leaflet that the Department of Health produced. In England, men and women aged between 60 and 69 years old are sent a stool testing kit (faecal occult blood test) every two years. However, the Be Clear on Cancer campaign aims to target symptomatic patients, therefore screening is not mentioned in the TV advert or posters. The reason for this approach, is to keep the campaign message simple and direct.

However, this campaign is an ideal opportunity for GPs and other healthcare professionals to prompt any patients aged 60+, to return their screening kit. Although GP practices are not directly involved in the delivery of the NHS Bowel Cancer Screening Programme, you will be notified when invitations for bowel cancer screening are being sent out in your area. It’s really important that people do use the screening kit when it arrives in the post. It can help detect bowel cancer early, before any symptoms appear.

If a customer or patient has symptoms of bowel cancer, they should visit their GP without delay. Even if they are waiting for or have just returned their screening kit, or have recently had a negative result.

Why run a bowel cancer campaign?

Bowel cancer is the third most common cancer in the UK. Around 34,000 people are diagnosed with bowel cancer [1] in England every year and around 13,200 people die from the disease [2].

Outcomes in the UK are worse than those in comparable European countries and it is estimated that around 1,700 deaths from bowel cancer could be avoided each year if survival rates were as good as the best in Europe. 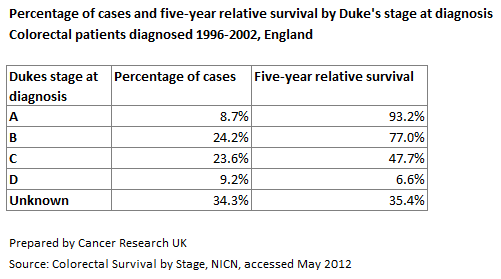 1. Data were provided by the Office for National Statistics on request, June 2012. Similar data can be found here: http://www.ons.gov.uk/ons/search/index.html?newquery=cancer+registrations

GPs have been criticised for making too many referrals in the past, is it any different now?

Patients urgently referred for suspected cancer by their GP still have a right to be seen within two weeks under the NHS Constitution. According to the most recent statistics available 95.4% of patients were seen by a specialist within two weeks.

The Department of Health put additional funding into Primary Care Trust baselines to meet the cost of any additional treatment resulting from work to improve earlier diagnosis, and alongside National Cancer Action Teams and the cancer networks, has been working with local NHS teams to estimate any potential impact.

Is there more information for patients that might be concerned about family history?

You may have a few patients coming to you with concerns about a family history of bowel cancer. If you feel their concerns require further investigation, you can direct them to local genetics clinics.

Do these kind of activities cause unnecessary panic?

The Be Clear on Cancer materials promote the potential benefits of early presentation and reassure people that the symptom is unlikely to be cancer, but that it’s best to get it checked. Its tone is balanced, practical and reassuring.

There was overwhelming support from the public following the first national bowel cancer campaign, with 92% of the public thinking it is important that adverts like this are shown.

Where can I find out more about Be Clear on Cancer?

For more information, or if you have any queries, please contact partnerships@phe.gov.uk.

Be Clear on Cancer statement

Be Clear on Cancer  is a cancer awareness campaign led by Public Health England, working in partnership with the Department of Health and NHS England. This page contains links to documents that we hope you find useful. Please note however that the views or opinions expressed within those links are not necessarily those of Cancer Research UK.