Population research has a fundamental role to play in our vision of 3 in 4 people surviving cancer by 2034, particularly in the areas of early diagnosis and prevention. To make sure we help drive the population research we need, there’s been a quiet revolution taking place in our approach to funding it.

Over many years, we have funded some of the world’s best population researchers, leading to changes in prescribing regimens and clinical practice, and the introduction of screening programmes. But our researchers told us that there was still huge untapped potential: if they had the time, space and flexibility to come together and collaborate they could make the UK a global hub for population research. The snag? There was no recognised funding mechanism they could use to develop the necessary infrastructure to run big, collaborative, international projects and no existing population research ‘Centre of excellence’.

Last year, to meet this challenge, we launched the Catalyst Award. Competing for a grant of up to £5 million over five years, teams had to show that their proposals, as well as being novel and innovative, were collaborative and sustainable, with a commitment to training and mentoring early career researchers, the research leaders of the future.

As Bob Strausberg, Chair of the Catalyst Award Panel, says, “It’s a great opportunity for international scientists from diverse disciplines, such as surveillance, early detection, prevention, and clinical research, to build connectivity with those they would not ordinarily interact with, in order to facilitate big impact research.”

Unsurprisingly, the scheme is attracting huge amounts of interest: for the first round, 56 different groups and institutions applied from 10 countries; in 2017, five shortlisted teams, comprising 22 groups from seven countries, are currently preparing their final applications, with a decision due in November.

As well as providing a unique way of meeting a substantial research need, the Catalyst Award offers applicants a very different experience from the norm. If their Expressions of Interest are shortlisted, four members of each team are invited to a Joint Applicant Meeting, before submitting their full proposals. It’s a great opportunity to meet up and do some face-to-face planning, but there’s more: instead of using the occasion to check out the competition and work out how to beat them, participants are invited to discuss each other’s proposals, with a view to improving them all. They’re also given an opportunity to meet the CRUK staff who’ll be shepherding their applications towards the award panel, to ensure that everyone knows how to present their ideas in the best possible way.

For those accustomed to keeping their cards close to their chests, the idea of spilling the beans to the competition may be disturbing, but Fiona Reddington, Head of Population, Prevention and Behavioural Research at CRUK, thinks that fears of being scooped are groundless: “the ideas are so ambitious that the expertise needed can’t be replicated,” she says, “so nobody’s going to get their project pinched.” Even if people are critical, it’s helpful, she adds: “Some of the brightest minds in population research are there, and you have an opportunity to pick their brains. They’ll see the potential weaknesses in your proposal that the committee will inevitably grill you on.”

The long-term aim of the Catalyst Award, to create the nucleus of a virtual centre for population research, will allow the many cohort studies in the UK, and eventually internationally, to be rationally combined and shared. Traditional cohort studies, where participants typically complete lifestyle-based questionnaires over a number of years, are changing drastically. Nowadays, biological and phenotypic data are also collected, and cohort studies represent a rich data resource to generate and test hypotheses, and to identify and validate biomarkers.

Backed up by the revolution in big data collection and processing, such studies mean that population research can be better integrated into discovery and clinical research, creating a genuine two-way flow of information: data from normal and patient cohorts will inform our understanding of the molecular basis of sickness and health, which can then be used to develop early detection and prevention measures. Bob Strausberg thinks that the Catalyst Award will be influential in driving this change: “I envisage that the Catalyst Award will one day be looked back on as a transformational scientific endeavour that made a difference for people everywhere”.

Find out more about the Catalyst Award, including how to apply 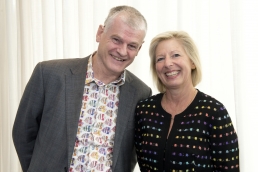 ​Fiona Walter, principal researcher in Primary Care Cancer Research at the University of Cambridge, and Willie Hamilton, professor of primary care diagnostics at the University of Exeter, are joint PIs on the first Catalyst Award project: CanTest – a £5 million venture aimed at investigating ways of bringing new and improved cancer diagnostic tests to GPs. Here, Fiona tells us about the CanTest team’s plans.

What is CanTest?
The Catalyst Award asked for a paradigm shift. For us as GP cancer researchers, the paradigm shift is to gather the evidence that’s currently lacking to change the way diagnostics are delivered in primary care, so that patients will either have a more timely provisional diagnosis of cancer, or an exclusion of cancer. As an example of why this needs to happen, for colorectal cancer, only about 6% of people getting a rapid specialist referral are diagnosed with colorectal cancer. Therefore, the vast majority of these patients may have been unduly worried about possibly having cancer, and many colonoscopies are undertaken with a negative result. Against the background of the financial concerns of the NHS, we need to use our specialist and GP care much more cleverly. The first part of the project is providing a solid evidence base about which diagnostic tests can be used safely, accurately and cost-effectively for patients in a community setting. We want to build up our multi-disciplinary evaluation expertise to form a ‘conduit’ so we have sustainable methodological approaches for evaluating not just current tests, but future tests as they come out. When exciting discoveries are made, we need to ensure there are researchers to translate and evaluate them so they can be used accurately and safely in primary care diagnosis. So our second objective is to nurture the workforce of the future by establishing an international School for Cancer Detection Research in Primary Care. We’ll train and support a new generation of scientists from a variety of backgrounds – it’ll be an educational melting-pot to rapidly expand the field internationally.

What does it mean for patients?
This is about more diagnostic tests for patients so they can be quickly reassured if they haven’t got cancer, and have the appropriate tests and referrals if there is a high chance that they do. Ultimately we will very quickly, in 3 to 5 years, be able to reduce later diagnosis and poorer outcomes for patients with some cancers. It’s the biggest investment there’s ever been in primary care cancer diagnosis and treatment, and in effecting change for the patient. And of course we’re not just talking about cancer. A patient usually presents with one of between 50 and 100 common symptoms – yet there are around 8,000 diseases which we have to identify. We’ll be helping our patients with any of these diseases if we could do more diagnostics in primary care.

Who do you have in the CanTest team?
We are lucky to have a group of people who bring specialist understanding to our team of GP cancer researchers. We’ve got behavioural scientists, health economists and statisticians involved, and they’ll help us understand more about the patient safety and cost effectiveness aspects. We can also learn a great deal from others around the world. In Europe, we will be working with colleagues from Denmark and Holland who have healthcare systems similar to ours, but we’re also working with GP colleagues from Australia and the US, both of which have very different healthcare systems to the UK; we can learn a great deal from them about some of the tests we think will be of value to the NHS, as they are already widely used in those countries where GPs don’t act as gatekeepers for specialist care. Our international colleagues are equally keen to develop the evidence base for some of the tests they use, as some can result in over-diagnosis and over-treatment. This is one of our major concerns – that you might diagnose people who are not at risk of dying of their disease. An important example comes from thyroid cancer, where there’s increasing evidence that tests are picking up cancers that don’t need treatment.

What’s your personal motivation?
I’ve been a GP for about 30 years. CanTest arises from that experience – feeling that we can always improve the way to best manage our patients. This amazing investment helps us provide the evidence to do exactly that. I’m excited to be involved in something that’s going to truly change patient outcomes not just in the UK, but worldwide.

This story is part of Pioneering Research 2016/17, our annual research publication.

Pioneering Research is packed with features celebrating the many achievements for CRUK and for researchers in our community over the last year, and the work we are doing right now as we implement our research strategy.

Improving the quality and quantity of research into cancers with the poorest survival rates, including brain and pancreatic cancers, remains a key priority across all aspects of our research activity.

The psychologist who changed cancer research

Jane Wardle, the pioneer of the behavioural sciences in cancer research, died in 2015 leaving an incredible research legacy.