Celebrating a lifetime in cancer prevention, translating evolutionary biology, and our leaders of tomorrow: the 2017 CRUK Research Prizes

Our annual Research Prizes recognise the achievements of the rising stars in cancer research, and celebrate the researchers who have shown outstanding dedication to beating cancer. We're back at the NCRI Conference in Liverpool to award our prizes for the eighth year.

Our leaders of tomorrow: the Future Leaders Prize

The Future Leaders in Cancer Research Prize recognises researchers who have produced research of international importance within 10 years of receiving their doctorate, and proved themselves capable of becoming leaders in the field. This year we've awarded three prizes. 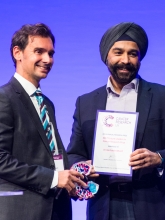 Dr Gerhardt Attard (Gert) is a clinician scientist who has quickly established an international reputation for improving prostate cancer care through his role as chief investigator on several pioneering clinical trials and in the clinical development of drugs including abiraterone. Alongside clinical trials research, he leads a group at the ICR's Centre for Evolution and Cancer which is investigating how treatment resistance emerges, and pioneering the application of liquid biopsies in prostate cancer research.

Gert is a CRUK Advanced Clinician Scientist Fellow and, since 2016, Group Leader at The Institute of Cancer Research (ICR) in London, as well as Honorary Consultant at The Royal Marsden hospital. He completed a CRUK Clinical Fellowship PhD at the ICR in 2010, and became a Consultant in Medical Oncology in 2013. In addition to his outstanding research, the panel commended Gert as an inspiring mentor and communicator.

Find out more about Gert's research 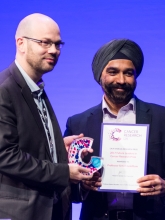 Dr Simon Leedham is a clinician scientist who has made important advances in cell biology and molecular pathogenesis of gastrointestinal cancers. His research has notably advanced our understanding of the role of BMP signalling in colorectal tumorigenesis, and he is now applying this through new therapeutic and preventive approaches.

Simon is a CRUK Clinician Scientist Fellow, Group Head at the Wellcome Trust Centre for Human Genetics, and Associate Professor at the University of Oxford, as well as Honorary Consultant at Oxford's John Radcliffe Hospital. He received his PhD from the CRUK London Research Institute in 2008, supervised by Prof Sir Nicholas Wright, and became a Consultant in Gastroenterology and General Medicine in 2010. In addition to his research, Simon was commended for his leadership as Director of the Oxford Centre for Personalised Medicine.

Find out more about Simon's research 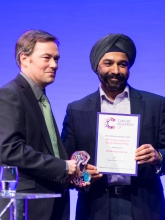 Dr Santiago Zelenay is an immunologist who is building an exciting research programme looking at the cellular and molecular mediators that regulate the immune system. His discovery that prostaglandin E2 production by melanoma cells enables immune escape has raised exciting new ideas for targeted approaches adjuvant to immunotherapy.

Santiago joined the CRUK Manchester Institute as a junior group leader last year, following a postdoc in Professor Caetano Reis e Sousa's group at the Francis Crick Institute, where he secured EMBO and Marie Curie Fellowships. His PhD, on the origin and function of regulatory T cells, was awarded in 2008 by Portugal's Instituto Gulbenkian de Ciência.

Find out more about Santiago's research 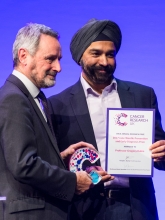 The Jane Wardle Prize celebrates researchers who have produced world-leading research which advances the prevention or early diagnosis of cancer. This year the prize is awarded to Greg Rubin, Professor of General Practice and Primary Care at Newcastle University. Greg's work has focussed particularly on understanding primary care in the diagnosis of cancer, and has had substantial impact on healthcare policy and practice.

Greg helped to ignite the early diagnosis field and has become an internationally respected researcher. His research addressing questions such as the efficacy of referral pathways has added substantially to the evidence base that guides how we allocate early diagnosis resources in the NHS.

Greg has played an important leadership role in the early diagnosis research community. His major achievements include leading an influential evaluation of early detection policies, and on the roles of awareness and diagnostic intervals within primary care in cancer control, which led to changes in NICE guidelines.

The panel commended Greg not only for his personal achievements, but also for his highly collaborative approach to research, and for his role as an educator, mentor and champion of the early diagnosis research community.

Find out more about Greg's research

Our Translational Cancer Research Prize rewards the team that has united in the quest to ensure scientific discoveries benefit patients and the public, and in doing so have made extraordinary breakthroughs. We awarded the prize this year to the outstanding Tumour Heterogeneity Team led by Professor Charles Swanton.

Few in the cancer research community will be unfamiliar with Charlie's work, or the team's TRACERx (tracking cancer evolution through therapy) programme, whose £13 million Lung Study is our single largest investment in lung cancer research. Alongside the TRACERx Lung Study, the prize-winning work incorporates associated projects including the TRACERx Renal Study, PEACE (posthumous tissue donation in cancer) study, and a circulating tumour cell programme.

The team aim to understand genomic complexity and heterogeneity in solid tumours, and to track tumour evolution through time and treatment. This year, the group was able to integrate their findings with large-scale clinical collaborative efforts, to identify how heterogeneity can be overcome effectively to design new strategies for targeted and immunotherapeutic approaches.

The panel were particularly impressed by publications characterising the interaction between immune and cancer cells during lung cancer development and in response to therapeutic intervention, and demonstrating the negative impact of intra-tumour heterogeneity in response to checkpoint inhibitors in lung cancer and melanoma. The work has important implications for therapeutic strategies, and is helping to focus efforts to develop therapies. The group's work serves as an excellent model for effective team science, fostering multidisciplinary collaboration between basic scientists and clinical researchers to achieve outstanding impact.

Find out more about the TRACERx Lung Study

Our Lifetime Achievement in Cancer Research Prize honours an individual who has demonstrated a lifetime commitment to the fight against cancer, making exceptional advances in the field. This year the prize goes to Professor Jack Cuzick. 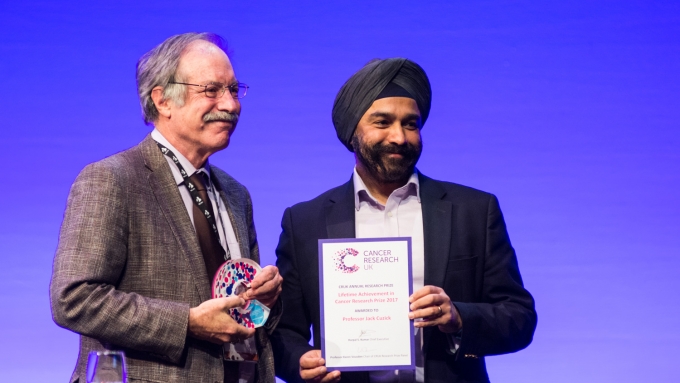 Jack also made valuable contributions to assessing the risk of developing breast cancer. His risk model is now used all over the world, especially in family history and genetics clinics. After identifying late-mortality from breast irradiation, his work has guided changes to the way in which radiotherapy is delivered. He has also made key contributions to cancer screening, notably in cervical and colorectal cancer. He pioneered HPV testing for primary screening, and has been a major contributor to the evaluation of other cancer screening modalities. He has also been great ambassador and advocate for the adoption of screening where it has been shown to be beneficial.

In his plenary lecture, Jack cites as a career highlight his work leading the IBIS studies — large, international clinical trials of tamoxifen, and later aromatase inhibitors, to prevent breast cancer. The IBIS studies have helped make chemoprevention an option for women with a heightened risk of breast cancer, and in 2014 we recognised the IBIS team's impact with the Translational Cancer Research Prize.

Jack has been an outstanding leader in the cancer research field over many years, and has been central in building the capacity of our world-leading population research. As the John Snow Professor of Epidemiology he has developed the Centre for Cancer Prevention, from its origins in the ICRF Lincoln's Inn Fields to the Wolfson Institute at Queen Mary University of London. Having originally trained in mathematics and physics in his native California, Jack's career is a shining example of the power of bringing diverse disciplines together in our community.

Congratulations to all of the very worthy winners of this year's prizes!