At CRUK we award prizes to members of the research community to recognise their outstanding achievements. Our awards support and celebrate the incredible work, dedication and scientific innovation of those at the forefront of advancing our ability to prevent, detect and treat cancer.

Our Future Leaders in Cancer Research Prize recognises those with great potential at the early stages of their research careers. Winners must have produced research of international importance within 10 years of receiving their doctorate. In 2016 the quality of nominations was incredibly high, and so the panel took the decision to award the maximum three prizes for this category.

Dr Georgios Lyratzopoulos, a CRUK Clinician Scientist Fellow working at University College London, has produced world-class outputs in key areas of population health research. His research has provided large-scale evidence for the influence of psychosocial factors in early diagnosis, highlighting the importance of ongoing community campaigns about cancer symptoms. His work has allowed a better appreciation for diagnostic timeliness in cancer patients presenting to their GPs with symptoms, and his discoveries have been highly influential, providing a roadmap to guide future early diagnosis strategies and investment.

Dr Florian Markowetz, a senior group leader at our CRUK Cambridge Institute, has, over the last seven years of his career, been on a quest to integrate genomics and imaging. His research is giving us unprecedented insights into the evolution of the cancer genome and its interaction with the tumour microenvironment. Florian has collaborated closely with clinicians to create novel quantitative assessments of histopathological images, whilst jointly analysing genomic aberrations in tumours. He has pioneered approaches to link genetic heterogeneity of tumours to clinical outcomes and has demonstrated how rigorous analysis of evolutionary patterns can predict progression-free survival in ovarian cancer. Florian is a true champion for research reproducibility and data sharing. He is leading the way by making the software developed in his lab freely available as a research tool for others – many having been downloaded thousands of times.

Dr Andrea Sottoriva, a Group Leader at The Institute of Cancer Research, has a passion for applying mathematical and computational methods to solve biological problems. He has pioneered the development of novel models based on understanding cancer evolution from a solid mathematical perspective, and his models have the potential to forecast the future course of disease in individual patients. His fresh perspective has revolutionised how data are generated and used in order to achieve maximum patient benefit. Andrea has transformed a wealth of existing publicly available data into intelligible information – detailing a new way to interpret cancer genomic data from single tumour biopsies.

These pioneering scientists are receiving awards for their extraordinary and wide-ranging contributions to cancer research. Although their work spans many different areas and types of cancer, they all share a determination to beat cancer for good. Through their pioneering work they open up new opportunities to detect and treat cancer which will help us save lives.

We were delighted to award the first prize to Dr Jo Waller, a CRUK Career Development Fellow working in the fields of epidemiology and public health at University College London. Jo trained and worked with Jane between 1998 and 2015, and like her mentor, Jo is committed to training junior colleagues, and has a reputation for being approachable and generous with her time. Jo has made substantial advances in our understanding of women’s attitudes to cervical screening and HPV vaccination – identifying the psychological challenges facing women who receive a positive HPV result through screening. Jo works to ensure that her findings lead to a real impact on cervical cancer prevention and early diagnosis in the UK and beyond. In particular, Jo’s research has directly influenced the Cervical Screening Programme in England.

Our Pontecorvo prize is awarded to CRUK-funded students who have produced outstanding PhD theses and made the greatest contribution to scientific knowledge in their field.

In 2016 the prize was awarded to Dr Nicholas McGranahan, an outstanding young scientist at University College London and the Francis Crick Institute. Nicholas is now a postdoc with Professor Charles Swanton, who describes him as a ‘rare breed’ due to the interdisciplinary nature of his work. With parallel interests in mathematics and cancer biology, he completed his PhD in Cancer Bioinformatics at UCL’s Centre for Interdisciplinary Research in the Medical and Life Sciences. Nicholas’s most striking contributions have been through his development of major new insights into mechanisms of cancer branched evolution and genomic instability. He has helped to set novel directions for TRACERx – a multi-million pound programme and our largest single investment in lung cancer research.

I felt very privileged to be nominated for this prestigious prize, and it was an honour and a surprise to be selected as the winner. I had a fantastic and rewarding experience working in Charlie Swanton’s group during my PhD and was fortunate to be involved in a great deal of exciting work. There is no doubt this work would not have been possible without the generous support from CRUK and I hope I can build upon this research in the future.

Our 2017 Research Prizes closed in March and winners will be announced in November. Nominations for 2018 awards open in November 2017.

Find out more about eligibility and how to make a nomination 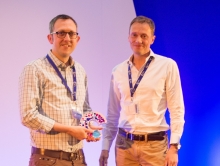 ​In 2015, Dr Edd James, Associate Professor in Cancer Immunology at the CRUK Southampton Centre, won the CRUK Inspiring Leadership Research Engagement prize for his enthusiasm in communicating science to the public. What set Edd apart are the creative methods he uses to bring to life complex science topics, using innovative, fun, interactive activities. So it’s no surprise to find that he put the prize money towards developing his most ambitious engagement activity to date.

Edd is now working with his local Research Engagement Manager and the Winchester Science Centre to create an arcade game that teaches players about immunotherapy. “The idea is that the player is recruited as a killer T-cell” says Edd. “They will be shown a letter sequence corresponding to the amino acid sequence of a known cancer antigen. They’ll then be shown pictures of cells with letter sequences and will have a short time to decide whether it’s one of the cells they are looking for and whether to kill it, or whether to save it – much like our immune system has to do. If they kill a healthy cell by accident the game is over.”

Built in the style of a 1980s arcade unit, with neon lights and flashing buttons, the game will generate instant nostalgia; but the underlying message is a serious one. “We want to show just what a difficult job the immune system has to do” Edd continues, “and how research into the way it interacts with cancer aims to make our own bodies more effective at recognising and fighting the disease.”

This story is part of Pioneering Research 2016/17, our annual research publication.

Pioneering Research is packed with features celebrating the many achievements for CRUK and for researchers in our community over the last year, and the work we are doing right now as we implement our research strategy.

Honouring a giant of translational research

Stan Kaye has devoted his career to bringing new drugs into the clinic and turning the UK into a drug development powerhouse. In 2016 we awarded him the CRUK Lifetime Achievement Prize.

We've awarded our Research Engagement Prizes to four outstanding researchers, recognising their extraordinary commitment in actively engaging and involving the public and patients with science.

We've awarded our annual Research Prizes to five exceptional researchers at our annual prize giving ceremony at the NCRI Conference, including a Lifetime Achievement Prize to Professor Stan Kaye for his achievements in drug development.