Future leaders and a lifetime in drug development: our research prizes

Every year we offer you the opportunity to recognise your peers with our Cancer Research UK Research Prizes and every year we receive outstanding and inspiring nominations in every category. Last week we had the pleasure of awarding the Research Prizes to five exceptional researchers at our annual prize giving ceremony at the NCRI Conference.

Our Future Leaders in Cancer Research Prize recognises those with great potential at the early stages of their research careers. Winners must have produced research of international importance within 10 years of receiving their doctorate. This year the quality of nominations was incredibly high, and so the panel took the decision to award the maximum three prizes for this category.

Our first Future Leader Prize winner is Dr Georgios Lyratzopoulos, a CRUK Clinician Scientist Fellow working at University College London. Georgios has produced world-class outputs in key areas of population health research. His research has provided large-scale evidence for the influence of psychosocial factors in early diagnosis, highlighting the importance of ongoing community campaigns about cancer symptoms. His work has allowed a better appreciation for diagnostic timeliness in cancer patients presenting to their GPs with symptoms and his discoveries have been highly influential, providing a roadmap to guide future early diagnosis strategies and investment.

Our next Future Leader Prize winner is Dr Florian Markowetz, a senior group leader at our CRUK Cambridge Institute. Over the last 7 years of his career Florian has been on a quest to integrate genomics and imaging. His research is giving us unprecedented insights into the evolution of the cancer genome and its interaction with the tumour microenvironment. Florian has collaborated closely with clinicians to create novel quantitative assessments of histopathological images, whilst jointly analysing genomic aberrations in tumours. He has pioneered approaches to link genetic heterogeneity of tumours to clinical outcomes and has demonstrated how rigorous analysis of evolutionary patterns can predict progression-free survival in ovarian cancer. Florian is a true champion for research reproducibility and data sharing. He is leading the way by making the software developed in lab freely available as research tool for others – many having been downloaded thousands of times.

Our final Future Leader Prize winner of 2016 is Dr Andrea Sottoriva, a Group Leader at The Institute of Cancer Research, who has a passion for applying mathematical and computational methods to solve biological problems. He has pioneered the development of novel models based on understanding cancer evolution from a solid mathematical perspective and his models have the potential to forecast the future course of disease in individual patients. His fresh perspective has revolutionised how data is generated and used in order to achieve maximum patient benefit. Andrea has transformed a wealth of existing publically available data into intelligible information – detailing a new way to interpret cancer genomic data from single tumour biopsies.

Andrea wasn’t able to attend the NCRI Conference Prize Giving Ceremony as his first child had just been born. Congratulations Andrea! Professor Paul Workman collected the prize on his behalf.

We are delighted to announce that the first ever winner of this prize is Dr Jo Waller, a CRUK Career Development Fellow working in the fields of epidemiology and public health at University College London. Jo trained and worked with Jane between 1998 and 2015, and like her mentor, Jo is committed to training junior colleagues, and has a reputation for being approachable and generous with her time. Jo has made substantial advances in our understanding of women’s attitudes to cervical screening and HPV vaccination – identifying the psychological challenges facing women who receive a positive HPV result through screening. Jo works to ensure that her findings lead to a real impact on cervical cancer prevention and early diagnosis in the UK and beyond. In particular, Jo’s research has directly influenced the Cervical Screening Programme in England.

Our Lifetime Achievement in Cancer Research Prize honours an individual who has demonstrated a lifetime commitment to the fight against cancer, making exceptional advances in the field. The winner’s have had a significant and sustained role in furthering our understanding of cancer, or had a major impact on the lives of people with cancer. This is our most competitive and highly anticipated prize. The winner’s keynote lecture and reflections on their career are often a firm favourite from the NCRI conference sessions.

This year’s prize was awarded to the extremely deserving Professor Stan Kaye, a consultant medical oncologist at The Royal Marsden hospital and emeritus professor at The Institute of Cancer Research.

Professor Stan Kaye has demonstrated a lifelong commitment to early stage clinical trials – he has been involved in the development of many of the cancer drugs we’re familiar with today.

In 1985 he moved to the University of Glasgow where he established an internationally competitive trials unit with the capability and capacity to conduct state-of-the-art early phase trials, attracting high quality scientific colleagues to work in Glasgow. Here Stan made important contributions to the development and approval of capecitabine and docetaxel for ovarian cancer. His work in ovarian cancer helped lay the foundation for today’s increasing focus on drug resistance as a major challenge. Stan also established a large referral practice of patients for novel drug therapies at the Beatson Cancer Centre, Glasgow, helping to bring benefits directly to people with cancer.

In 2000 Stan moved to The Institute of Cancer Research and was tasked with setting up a strong foundation for early clinical trials. To accomplish this, he created the Drug Development Unit which is now one of the largest in the world. The important first-in-human Phase I trials of a range of innovative molecular targeted agents have been successfully completed at this unit, and it has provided training for many talented clinicians who have gone on to establish phase 1 units elsewhere in the UK and beyond.

Among Stan’s most notable achievements was his role in the development of the PARP inhibitor, olaparib. Stan and his team were the first to show clinical efficacy of PARP inhibitors in BRCA mutation-carrier patients, and since demonstrated a key role of PARP inhibitors in BRCA mutation-associated ovarian cancer. This pioneering work resulted in the approval of olaparib by the European Medical Agency (EMA) and Food and Drug Administration (FDA) in 2014. His team were also the first to show the potential of abiraterone in prostate cancer patients and to subsequently take this through to EMA and FDA approval.

Through his career Stan has been, and continues to be, a mentor and a role model to young researchers, leading by example and demonstrating the value of collaboration between the laboratory and clinic – Stan was one of the first clinical cancer researchers to make the connection between the lab-clinic interface. Stan officially retired in 2014 but remains an active adviser to many organisations. His many outstanding contributions and achievements make him a very worthy winner of our Lifetime Achievement Prize.

It’s a great honour to be awarded this prize by Cancer Research UK. Over my career I’ve had the good fortune to work with superb colleagues, both in the laboratory and the clinic. I’ve also been fortunate enough to have known many inspiring cancer patients particularly with ovarian cancer, and they have been my motivation for developing new drugs and treatments. I’ve been privileged to work at a time when our understanding of the biology of cancer has opened up new avenues for treating the disease and it’s been extremely rewarding to play a part in taking innovative new treatments to patients. 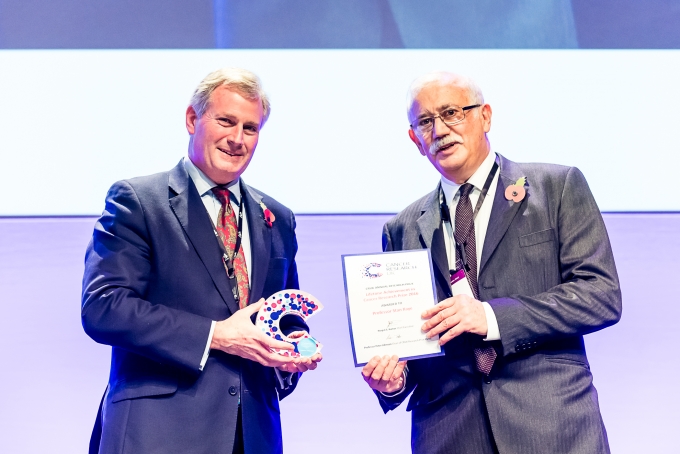 There was no Translational Cancer Research Prize awarded this year. We received some excellent entries, which were regarded to have the potential to be worthy winners in years to come, but they had yet to be translated far enough to provide a clinical benefit for people with cancer. A decision was therefore made not to award this prize this year. We are keen to see applications from all areas of cancer research, especially from the radiotherapy, diagnostic, and surgery fields for the 2017 prize.