Every year we spend hundreds of millions of pounds supporting high-calibre cancer research in the UK, and increasingly across the world, which we believe has the potential to provide the greatest benefit to the public and cancer patients.

Throughout our portfolio we rely on the creativity and innovation of our research community, but as a funder we need to find novel ways to spark and fund creative ideas, and encourage fresh thinking for how to tackle cancer challenges. That’s why we’ve developed exciting new ways of supporting research and generating novel research ideas across our funding portfolio. This setup is already proving successful, and we want to continue to drive innovation throughout our research funding.

One such innovation is our Population Research Innovation Workshops. First created as part of the CRUK/BUPA Foundation Cancer Prevention Initiative, we’ve been running a series of three-day ‘sandpit’ workshops aimed at identifying new ways to prevent cancer and diagnose the disease earlier. These workshops bring together 25 participants from a range of different disciplines to explore cancer challenges in population research, build new collaborations and encourage participants to ‘think outside the box’ to develop a pitch for a research project that’s potentially funded on the spot.

“New ideas come from the intersection between disciplines,” says Professor Frank Kee, director of the first workshop, held in July 2014. “Social scientists call it the Medici Effect, when you let people peer over the fence and get a fresh view on a shared problem. It’s why groups are so much smarter than their smartest members.”

Through a series of structured activities, exploring the challenges and generating ideas, and with real-time peer review, participants form teams and develop research ideas. On the final day, teams pitch their ideas to the Workshop Panel which includes experts in the field and people affected by cancer. Funding recommendations are made there and then, with successful project teams receiving up to £20,000 each to support subsequent pilot and feasibility studies over 12 months, hopefully leading to larger-scale applications for further funding from CRUK or other organisations.

With their sandpit approach, CRUK is leading the way in driving innovation in population research.

So far we’ve run five of these sandpits, and funded 29 projects. The ideas generated are as diverse as a ‘Bank of Good Times’, an app that captures positive emotions to help motivate people to continue with physical activity. Then there’s #innerselfie – a virtual reality project aimed at getting kids to understand their future risk of cancer and adopt healthy habits that will last a lifetime, and IBAC – an online tool to identify the false beliefs people hold about the causes of cancer.

And the outputs are already impressive, with successful data collection, conference presentations, and publication submissions in the pipeline. The workshops have also helped to invigorate the population research community, sparking new collaborations and encouraging early career researchers to apply for fellowships in the field.

Find out more about our Population Research Innovation Workshops

As well as encouraging fresh thinking, we’re also funding projects that might not be supported through more traditional routes. Through our Pioneer Awards we’re taking on high-risk, high-reward ideas from researchers in any field and at any stage of their career. Rather than focusing on the track record of the applicant, the committee is looking for outstanding and exciting new ideas, which have the potential to make a big impact on cancer survival.

Offering funding of up to £200,000 over two years, the awards are unusual in a number of ways. For a start, the initial application is just two pages long, rather than a conventional lengthy form. Applications are encouraged from a broad range of disciplines, such as population researchers, computer scientists, mathematicians and software developers, in addition to more traditional biomedical research fields, and all applications are anonymised, removing any unwitting bias. Finally, applicants have to pitch their idea in a ‘Dragon’s Den’-style presentation, to experts drawn from a range of scientific and technology backgrounds, to convince them that their idea is worth a shot. It’s a fast process, from initial application to receiving funding can be as little as four months, with proposals being considered three times a year.

Marjolein Schaap, Research Funding Manager at CRUK overseeing these awards, explains, “We’re happy with the assumption that nine out of 10 of these projects might fail because they are so high risk, but we feel that it’s the best way to encourage innovative ideas, getting people to think a bit more ‘out-of-the-box’. Applicants don’t even need any preliminary data to put in their proposal – it’s about the potential of the idea rather than having already proven that it works.”

After two rounds of funding, the committee has funded eight projects worth a total of £1.3 million, ranging from asking whether artificial intelligence could help with surgical decision-making to exploring whether a drink containing oxygen microbubbles could improve efficacy of treatments. Funding has been awarded to individuals from a variety of backgrounds and career stage, from early career researchers with limited publication track record to experienced researchers from non-traditional biomedical research disciplines such as technology and surgery. 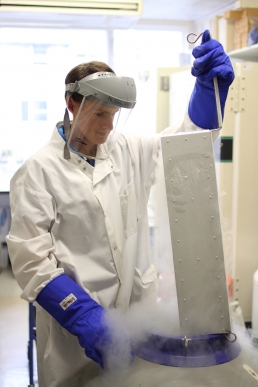 One successful applicant is Gavin Garland, a postdoctoral scientist in the Department of Pathology at the University of Cambridge. His diagnosis with lymphoma as a teenager was a prime motivator in his decision to follow a career in cancer research, and also underpinned his winning idea. “When I had cancer my consultant spoke to me about the hypothetical idea of a ‘magic bullet’ treatment, which always stuck with me. I started thinking: is anyone still looking for magic bullets? If I was going to do an experiment, that’s what I would do.”

Gavin’s thoughts led him to the idea of co-culturing cancer cells together with healthy cells and bacteria, until the bacteria produce molecules that selectively target cancer cells while leaving the healthy ones unharmed.

“Going in front of the committee was quite scary because I’m not the most confident person, but I was really enthusiastic about my idea which impressed them. The committee is fantastic – they’ve been really supportive. My advice to anyone thinking of applying would be to go for it. Run your idea by someone you trust first – I talked my idea through with a post-doc in the lab who helped me fine tune and tweak my proposal.”

Three months into the project, Gavin is busy optimising cell lines and culture conditions so he can start his experiments. “It’s probably the most fun I’ve had as a researcher to date,” he enthuses. “Working on my own stuff is what I’ve wanted to do since I was 16, so this is a dream project to be able to ask these kind of questions.”

Find out more about our Pioneer Awards

We believe that innovation is essential to generate new solutions. We’re putting funding mechanisms and schemes in place to support and drive innovation, but we realise that not all innovation happens in this structured way, as Iain Foulkes, Executive Director of Strategy and Research Funding at CRUK, explains:

Sometimes the most innovative ideas don’t conform to the rules or fit in a funding framework – if you’ve got an idea that doesn’t fit the mould but could be ground-breaking, we want to hear it.

Welcome to the virtual lab

We’re embracing innovation and pioneering new approaches across our organisation, including how we share discoveries with our supporters. Thanks to you, last year more than 13,000 people visited a CRUK-funded lab in person, seeing first-hand how the science they help to fund is making a difference. These trips are as inspiring as they are informative – we know that experiencing our science first-hand is incredibly motivating for our supporters. We want more people to have the opportunity to engage directly with our research, helping to generate more funds we can plough into research.

With a goal of increasing the reach of our public engagement activities, our Research Engagement team got together with two digital agencies to create a virtual lab tour using cutting-edge smartphone virtual reality headsets. Moving seamlessly from basic biology to clinical trials, it’s a 360 degree immersive viewing experience of life at our CRUK Manchester Institute, The tour gives viewers access into the world of science without ever having to set foot in a lab. Introduced by researcher Marina Parry, virtual visitors can navigate through four different labs, looking at the lab from every angle and even peering at cells down a microscope. Every user has a complete 360-degree view of their surroundings, as the camera moves in tandem with every subtle turn of their head.

The team is now sharing the virtual tour at events across the country, and is excited to take this to the next level by developing a mobile app which will allow anyone, anywhere to experience life in the lab, meaning we can reach even more people with our cutting-edge science.

Science blog: What do palladium metal, Charles Darwin and Salmonella have in common?