Biotherapeutics: Where next for cancer immunotherapy?

CRUK, together with its commercial arm Cancer Research Technology, is driving discovery research in immuno-oncology which is leading to novel and exciting immunotherapeutic possibilities. Here, we present a cross-section of this work, together with some of the hottest topics preoccupying the global immunotherapy community.

Cancer immunotherapy is going from strength to strength, as first and second generation therapies that alert the immune system to hidden tumours by switching off checkpoint controls continue to have spectacular success in the clinic. Inevitably there have been setbacks, as many patients do not respond, or cannot tolerate the often toxic side effects of treatment, but a future where immunotherapy replaces chemotherapy as the first-line treatment for many cancers seems likely.

While there is still intense interest in further refining existing therapies targeting checkpoint controls, attention in both the academic and pharmaceutical sectors has also turned to the next big challenge: the problem of why some patients and tumour types are non-responders. The solution, according to many, lies in combination therapy – using both old and new ways of manipulating the anti-tumour immune response in concert with relief of checkpoint controls. Protocols combining immunotherapy with radio- and virotherapy are also being developed globally.

The advent of immunotherapy is truly a step-change in our ability to treat many cancers. As the excitement settles into a consideration of how best to move forward, it has never been more important to support and develop the immunotherapy community within the UK. Of course, as in any field, scientists will always be the key to progress, but funding organisations also have an important part to play. CRUK has the resources and ambition to turn your ideas into patient benefit as quickly and efficiently as possible, so come and talk to us – we can help you to help us step into a new era of cancer therapy.

Once jump-started by immunotherapy, successful tumour killing needs the anti-cancer immune response to become self-driven. Aiding this crucial transition, whilst preventing it from running out of control, is the rationale behind combination therapy. For clarity, it’s helpful to consider the anti-cancer immune response as a cycle, as proposed by Dan Chen and Ira Mellman in an influential Immunity review in 2013.

The Cancer-Immunity Cycle begins when cancer cell antigens are released (step 1), and presented to the immune system (step 2), resulting in priming and activation of T cells (step 3). Activated T cells must then migrate to and infiltrate the tumour (steps 4 and 5), where they bind to tumour cells (step 6), and collaborate with the innate immune system to kill them (step 7). Cell killing leads to the release of more cancer antigens, resulting in another revolution of the cycle. Each successive revolution amplifies the response.

Steps 3 and 7 are the points in the cycle at which checkpoint controls can kick in, putting the brakes on the cycle and stopping it dead. The recent immunotherapeutic breakthroughs have resulted from the development of agents able to take these brakes off. The anti-CTL4 drug ipilimumab forces T cell activation at step 3, and the anti-PD1/PDL1 drugs nivolumab and pembrolizumab maintain activated anti-tumour T cells in a combat-ready state at step 7, by inhibiting T cell exhaustion and tolerance. Taking the brakes off means that therapeutics able to accelerate and amplify the cycle are now able to work more effectively. 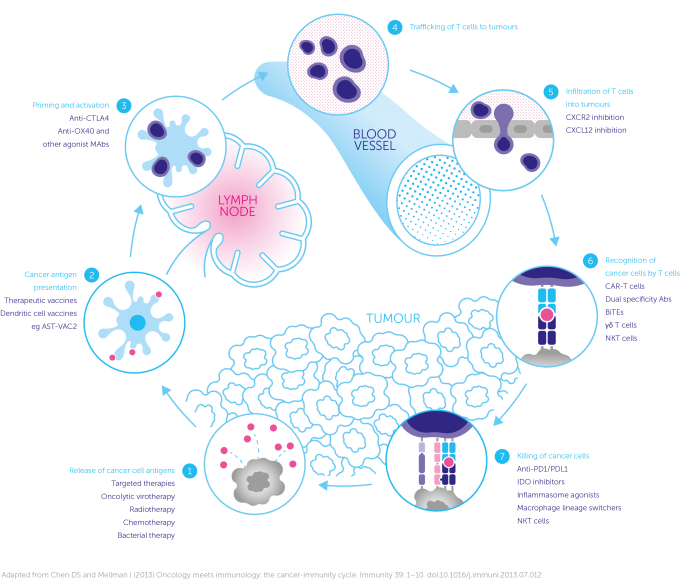 Many existing targeted drugs currently being trialled as combination therapies focus on cancer cell killing, with concomitant release of antigens, but other modalities are increasingly in the spotlight. At The Institute of Cancer Research, Kevin Harrington is running a Phase III trial of T-VEC, an HSV-1-based oncolytic virotherapy, in combination with pembrolizumab for treatment of advanced melanoma. And in a different approach, a Trojan Horse oncolytic therapy is being explored at the University of Sheffield: work from the labs of Claire Lewis and Munitta Mutana, showing that a patient’s own macrophages can transport the oncolytic virus Ad[I/PPT-E1A] deep into the heart of prostate tumours, is now being taken into a CRUK-funded Phase I clinical trial led by Janet Brown, also in Sheffield, and in collaboration with our Centre for Drug Development (CDD).

Combined radio- and immunotherapy is attracting attention, due to the abscopal effect, a phenomenon whereby on rare occasions localised radiotherapy together with relief of checkpoint blockade is associated with the regression of metastatic cancer at a distance.

Vaccination, the traditional way of artificially presenting antigens to the immune system, is experiencing a resurgence. Therapeutic cancer vaccines have a long and largely unsatisfactory history, which in the light of our new understanding of checkpoint inhibition is now perfectly explicable; trying to rev up an immune system whose brakes are firmly applied was never going to be successful. However, as a combination therapy, vaccines are far more likely to work, and CRUK has some exciting prospects in the pipeline. One of these is the work of Alan Rickinson and colleagues at the University of Birmingham, whose long-term commitment to EBV vaccine development was recognised by the 2015 CRUK Translational Cancer Research Prize.

Dendritic cells are the professional antigen presenting cells of the immune system, and using them as vectors to stimulate an immune response to cancer has had some success in the past. However, the need to laboriously culture dendritic cells from individual patients, and then load the cells in vitro with cancer antigens, has severely limited progress. Our CDD has an innovative take on this. In partnership with Asterias Biotherapeutics, they’ve developed an off the shelf approach where stem cells can be differentiated into dendritic cells, which are then loaded with telomerase, commonly upregulated in many tumours. The resulting vaccine, AST-VAC2, is being made in the CRUK Biotherapeutics Development Unit at Clare Hall, and is projected to enter a clinical trial in lung cancer in 2017.

Step 3 is the point of the cycle at which the effector: regulatory T cell balance of the immune response is established. CTLA4-blocking antibodies such as ipilimumab move the balance over to favour effector T cells, allowing a more vigorous immune response, but anti-CTL4 blockade is not always effective. Alternatives, such as agonistic antibodies able to switch on positive regulators of effector T cells, are being trialled in combination therapies, but whilst promising, it’s too early to say whether such strategies will be widely applicable due to sometimes severe toxicity.

Analysis of cancers where checkpoint inhibitors have been ineffective has shown that in some cases, notably pancreatic cancer, tumours can construct a fortress around themselves that immune cells cannot penetrate. In 2014, Doug Fearon and colleagues at our CRUK Cambridge Institute showed that pancreatic tumour cells are coated in the T-cell-excluding CXCL12 chemokine; remarkably, whilst anti-PDL1 therapy was ineffective, combining it with the CXCL12 inhibitor AMD3100 resulted in significant tumour shrinkage in a mouse model. Two years on, AMD3100 is going into Phase I clinical trials for pancreatic cancer both here and in the US, with a view to testing it in combination therapies.

Glasgow-based CRUK scientists Jennifer Morton and Owen Sansom, working in collaboration with AstraZeneca have recently shown that this approach can be extended to other chemokines. In their labs, an experimental drug against the CXCR2 protein not only suppressed metastasis in a mouse model, but, just as for AMD3100, improved T cell entry into pancreatic tumours. In mice, combined inhibition of CXCR2 and PD1 significantly extended survival, making CXCR2 another excellent prospect for a therapeutic target.

CAR-T cells, so called because they express artificial Chimaeric Antigen Receptors, can bind to and kill cancer cells. Using CRISPR to modify and introduce genes into cells means that such cell-based therapies are booming. Engineered receptors of all shapes and sizes are being developed, aimed at achieving better activation and killing, whilst ramping up the affinity and specificity with which the receptors recognise and bind their tumour targets. To increase efficacy, most are being considered in combination with checkpoint inhibitors, as are the therapies described below.

In another approach to tumour recognition, dual specificity antibodies and connecting bi-specific T cell engagers (BiTEs) are being used as bridging molecules to grab hold of tumour and immune cells, bringing them close enough to activate the kill function of the immune cells. Those that have been trialled so far are showing high response rates, albeit often with high toxicity.

CRUK is supporting several lines of work in this area, ranging from trials of next generation CAR-T cells for neuroblastoma (John Anderson at Great Ormond Street Hospital, sponsored and managed by our CDD) and pancreatic cancer (John Maher at UCL) to a company based around CAR-T therapy to disrupt tumour vasculature via binding to CLEC14a, a marker of tumour angiogenesis (Steven Lee and Roy Bicknell in Birmingham, in collaboration with CRT and the Cell Therapy Catapult).

The interaction of cancer cells with the tumour microenvironment, including the cells of the adaptive and innate immune systems, determines whether a tumour will survive and prosper or wither away. Whilst targeting the PD1/PDL1 checkpoint has been very successful, it’s clear that combining checkpoint inhibition with other strategies to mould the inflammatory microenvironment will be even more effective. A host of ideas are currently touted, particularly in the relatively unexplored area of innate immunity. There’s a lot of interest in manipulating inflammasomes, the signalling scaffolds that trigger cell killing by the innate immune system. Agonists are being developed to artificially activate the inflammatory response, although concerns about toxicity mean that any such therapies would have to be strictly topical, perhaps delivered by injection into the tumour.

Monoclonal antibody-based drugs have provided the platform for the success of immunotherapeutic checkpoint inhibition. The exquisite specificity of antibody variable regions as a means of manipulating the immune system and its tumour targets, means that the role of antibody-based biotherapeutics has never been more important.

The CRUK-MEDI Alliance Laboratory is testament to CRUK’s determination to put biotherapeutics front and centre of our research. The lab, a joint project between CRUK and MedImmune, is an opportunity to crowdsource ideas for new targets, and rapidly put them into practice. According to Rob Williams, Chief Drug Development Scientist for our Centre for Drug Development (CDD): “The philosophy is that we don’t know what’s coming next”, he says, “so we want to tap into the community to pick up exciting ideas, and turn them into novel biological therapeutics”.

The lab specialises in phage display technology, which allows researchers to quickly scan through millions of randomly-generated antibodies to find ones that recognise important molecules involved in cancer. Maria Groves believes MedImmune is the perfect partner for such a strategy. “MedImmune provide 20 years of phage display expertise and in-depth knowledge of the technology and drug discovery and disease processes”, she says. But collaboration will be the key: “Building a network of principal investigators generating novel ideas for oncology therapeutics will be central to the success of this exciting new venture”, Maria continues.

The lab has already reviewed over 20 applications, several of which are now major active projects. Whilst access to the lab was initially open only to CRUK-funded researchers, in autumn 2016, this will be opened up to all researchers. Rob’s message to the research community is clear: “We want people to think imaginatively about novel ways of using biotherapeutics to fight cancer, and to come to us with those ideas. CRUK has the infrastructure and funding schemes to develop new concepts into tomorrow’s medicines – we want to hear from you!”

How we support drug discovery research