Most people do not fear death at cancer diagnosis

Manage your cookie settings here
Cancer Research UK's latest campaign, "Right Now", is being launched to show that cancer continues to have an emotional and physical impact, and that research is happening right now to develop better treatments and improve survival.

Most people in Great Britain do not fear that a cancer diagnosis would end in death according to a new survey* commissioned by Cancer Research UK.

Of those who had been diagnosed with cancer only a third (30 per cent) said fear of death was one of the emotions they felt when they were given the news.

Similarly, just 29 per cent of those who knew someone diagnosed with cancer mentioned fear of death while 68 per cent cited sadness and 52 per cent shock at the news.

For cancer patients, 39 per cent cited determination as one of the emotions they felt on getting a diagnosis.

Most Brits – around 70 per cent – agreed that scientific research is the only way that new treatments and methods will be developed to prevent (70 per cent), diagnose (69 per cent), treat (71 per cent) or cure (73 per cent) cancer.

Cancer Research UK is highlighting the personal impact of cancer in its latest campaign**. A series of short 60 and 30 second films which show the experience of patients going through treatment or being told test results will be broadcast over the coming weeks.

Cancer Research UK hopes the campaign will highlight that cancer continues to have an emotional and physical impact, and that research is happening right now to develop better treatments and improve survival for those people affected by the disease.

Only six per cent of people correctly knew that one in two people in the UK will develop cancer at some point in their life. Most people (83 per cent) thought this figure was less common than one in two.

Angie Ayres, 52, from Southampton, features in one of the films and was diagnosed with a fast-growing stage 4 breast cancer after a routine mammogram earlier this year. A lumpectomy was followed by further surgery including removal of lymph nodes. After having chemotherapy Angie is now having radiotherapy, with her last session planned for Christmas Eve.

Angie's Dad died of cancer in November 2013 and she decided to move back to Southampton to help look after her Mum.

Angie said: "From the day I was diagnosed to going into theatre it was all so quick, I didn’t have time to process things – I just got on with it. My first thought was ‘what’s the plan of action?’ Some people go into the depths of despair but because of my dad I got angry. I visualised a pair of boxing gloves and thought ‘I’m going to fight this’. I decided cancer wasn’t going to get me. 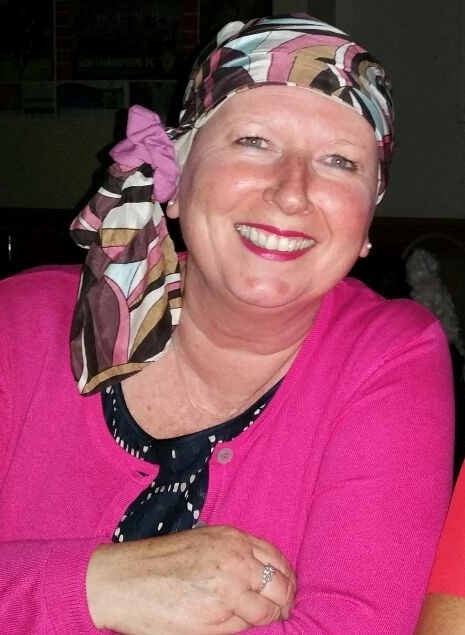 "I started radiotherapy at the beginning of December and that’s a completely new experience. My last radiotherapy session is on Christmas Eve – it’s the best Christmas present I could have. I’ll always be grateful to my GP’s surgery for sending me the mammogram letter and for all the treatment and support I’ve received from the NHS. Being part of this campaign has also made me aware and thankful for the research that is going on, right now, to develop new and better treatment."

Martin Ledwick, Cancer Research UK’s head cancer information nurse, said: “It’s reassuring to see that most people don’t list fear of death as a reaction to cancer. A cancer diagnosis can be overwhelming, but more than ever before research has led to better treatments and more patients surviving. In the future we know that one in two will be diagnosed with cancer but more people than ever are also surviving the disease.

“Cancer Research UK is working every day to keep improving the outlook for patients. Better awareness of signs and symptoms, improved screening and diagnostic tests, and more effective treatments will help us achieve our goal of helping three in four people survive cancer for at least 10 years, rising from two in four. Our latest campaign is a powerful reminder of why we need to do this. Right now.”

* All figures, unless otherwise stated, are from YouGov Plc. Total sample size was 2,077 adults. Fieldwork was undertaken between 10th - 11th December 2015.  The survey was carried out online. The figures have been weighted and are representative of all GB adults (aged 18+).

Cancer Research UK worked with creative agency Anomaly to develop the ground-breaking campaign to show the true reality of cancer right now. The Cancer Research UK story is too big to be told through one piece of content or one point of view. By using documentary filming and photography, ‘Right Now’ gives a window into this complex world: a series of privileged glimpses into the lives of the individuals and families coping with the profound impact cancer has on them, alongside highlighting the importance of research.

Anomaly worked with documentary television production company The Garden, creators of the award-winning Channel 4 programme 24 Hours in A&E, to gain this unique perspective, achieving an authenticity and visual immediacy like no other advertising campaign before. At the end of 2015, cameras were granted exclusive access into the Leeds Cancer Centre, Southampton General Hospital, St Bartholomew’s Hospital London and the Cancer Research UK Cambridge Institute to capture raw, honest and touching moments.