The ’62 day’ waiting time target for cancer patients in England has been missed again, marking 3 years since the target was last met.

NHS England aims for 85% of patients to start their cancer treatment within 62 days following an urgent GP referral for suspected cancer.

“We know that there are major staff shortages...which must be tackled in order to see progress” – Emma Greenwood, Cancer Research UK

The latest NHS figures report that in the last 3 months of 2016 only 82.2% of patients were treated within that time, similar to the previous 3 months and marking a distinct lack of progress.

This failure means that more than 70,000 people in the last 3 years have waited longer than the 62 day target to start treatment.

Around 294,000 people are diagnosed with cancer in England every year. This number is expected to rise in the future, so services need to be able to cope with increasing demand.

Emma Greenwood, Cancer Research UK’s director of policy and public affairs called the delays “unacceptable”, saying they reflect the extreme pressure the NHS is under.

She pointed to delays in patients getting tests and results as part of the problem. “We know that there are major staff shortages for tests like imaging and endoscopy, which must be tackled in order to see progress,” she said. 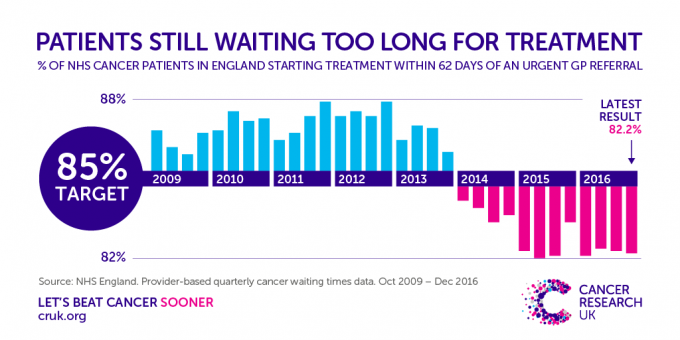 Despite a 2015 commitment from the government for extra funding to increase earlier cancer diagnosis, this remains a major bottleneck in patients’ pathway from referral to treatment.

“The government promised to spend up to £300m more by 2020 to improve the diagnosis of cancer and we would like to know how that money is being spent,” said Greenwood.

“Cancer targets exist to ensure quick diagnosis and access to treatment, which is vital if we're to give patients the best chance of a cure and are serious about having survival rates to match the best in the world.”