News report
14 December 2016
In collaboration with the Press Association

New obesity figures show the average man in England weighs nearly a stone more than he did 20 years ago.

“This excessive weight is putting the NHS under enormous strain and the health of the nation at risk" - Alison Cox, Cancer Research UK

Figures from the NHS’ Health Survey for England show that 27% of adults are now classed as obese.

Being overweight is more common than being obese, with 41% of men and 31% of women falling into this category.

The figures also show people in England have put on almost 1.5 billion pounds in weight over the last 20 years, according to calculations by Cancer Research UK.

A man’s average weight has increased by 12lbs over the last 20 years, while for women it’s gone up by 10lbs.

Along with a number of health issues, being overweight or obese increases the risk of 13 types of cancer. 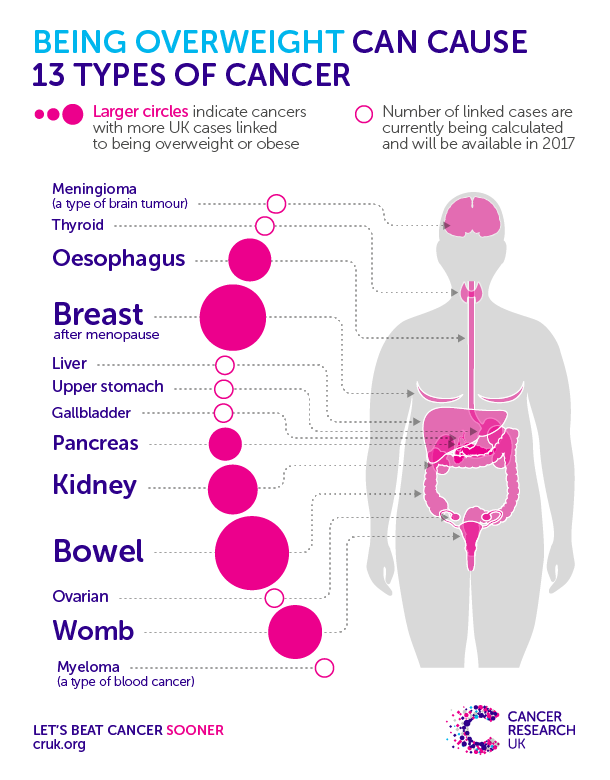 Alison Cox, director of cancer prevention at Cancer Research UK, said that rising bodyweight is “putting the NHS under enormous strain and the health of the nation at risk”.

Cox added that being overweight or obese is the second largest preventable cause of cancer after smoking. And she stressed that it’s important that people are given a helping hand to maintain a healthy weight, particularly from government.

The Government recently revealed details of its long-awaited sugary drinks tax. If accepted by MPs, the tax could become law by April 2018.

“The sugar tax is a great start and could prevent millions of cases of obesity. But the Government also needs to protect the next generation from junk food adverts on TV before the 9pm watershed,” said Cox.

“Making small changes in eating, drinking and being physically active that you can stick to in the long term is a good way to reach a healthy weight and stay there."