News report
3 November 2016
In collaboration with the Press Association

“The trend over the last decade is showing no signs of slowing down" - Alison Cox, Cancer Research UK

The percentage of overweight and obese 10 to 11-year-olds has increased over the last decade, the data from the National Childhood Measurement Programme show.

“The trend over the last decade is showing no signs of slowing down, and this worrying news is something that could have been prevented with more government action.

The Government released its childhood obesity plan in August, which included measures such as a sugar tax and reducing the amount of sugar in junk food.

“The Government still has a chance to save lives,” added Cox, who said that measures like the sugar tax and plans to reduce the amount of sugar in food were welcome steps to tackle childhood obesity.

“[government] has already recognised the influence of junk food marketing on children by banning junk food advertising during children’s programmes. It’s time now to stop this influential marketing before 9pm,” she added. 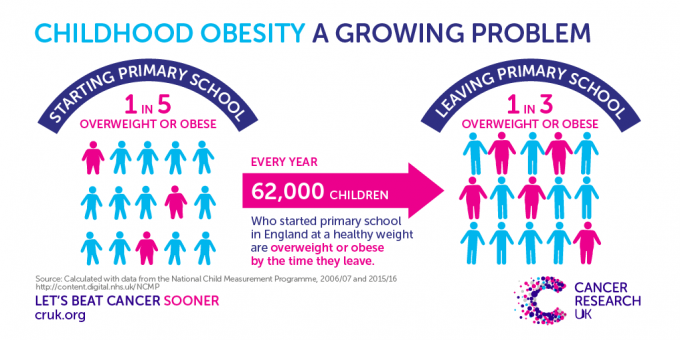 The new data show that while the proportion of children who are overweight has stayed largely the same, obesity levels have risen in the last year. This is even the case for the youngest children being measured, aged 4.